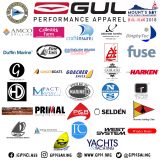 GPS tracking was provided by Sailing Southwest. All of the races can be found from here: https://www.tracace.co.uk/events/races/?eventID=28

Were you one of our speed demons?! The fastest three boats from each race are below with Neil Marsden and Derek Hill clocking the fastest time of the week.

Race 1 of the Day Sponsor

Spot Prize   of a Stand Up Inflatable Paddle Board, generously donated by GUL. Won by Megan Hicklin.

Social Sponsors for the evening – Guarsu for prosecco and Amco Drilling and Primal Cure for the Fireworks.

P&B will be our onsite Chandlers for the event to keep your boat going and you kitted up. There will be a packed social programme with non-sailors and families welcome. The Club is in the centre Marazion on the water-front facing St. Michael’s Mount and we are working with them to ensure that there is enough space for competitors and non-sailors to socialise comfortably and make this a fun, good value, event for all.