GP14 Association members were again kindly invited to join York RI Sailing Club on their annual weekend (24–26 June 2016) of cruising and camping on the extensive and beautiful waters of Ullswater in the Lake District.

The weekend started on Friday with reports that a red GP14 was invading the Swallows and Amazons territory on Coniston Water, another large lake the opposite side of the Lake District to the intended base at Fairfield Marina on Ullswater. However, the crew safely escaped capture and arrived at the camping site to tell of their adventures with the must-have fish suppers, of searching for and finding the secret harbour on Wild Cat Island, rounding Kanchenjunga before safely recovering the boat by the Amazon Boathouse. Meanwhile the rest of the fleet, unaware that these adventures were taking place, arrived at Fairfield, rigged their boats and tested the water in perfect conditions with sun and a nice breeze before gathering for the best fish and chips money can buy.

Saturday saw sunshine accompanied by a fickle wind that came and went with 360-degree shifts to test the skills of all the sailors including the racing fleet from Ullswater Yacht Club, looking frustrated waiting for the first gun – the fleet including Nick and Ellie Devereux, transferring their skills from GP14 to a 29er. The cruising fleet, undeterred by the testing breeze, skilfully navigated to the north end of the lake, avoiding the out-flowing river and steamer terminal to beach for a well-earned coffee and scone at Granny Dowbekin’s Tearoom in the picturesque village of Pooley Bridge. This gave ‘time and opportunity’ for an architectural inspection of the recently opened bridge which replaced the 300-year-old one swept away by the winter floods, the only conclusion being that this one will not last as long as the previous one.

A shower of rain during the coffee break washed the wind away for the day so a paddle race home proceeded. Young Michael (aged 10), having won the skilled sailing race up, was obviously too soft on his crew as they paddled home, allowing Vice-President Steve the line honours – last seen in the distance whipping his crew with the mainsheet shouting faster-faster or something of the sort …

Saturday evening saw a huge gathering round an array of barbeques and camping stoves to cook an endless supply of food. What was left or dropped quickly got hoovered up by the two resident dogs, fully under the control of their young minders. Drinks and chat continued to the wee small hours with the group hiding under a gazebo out of reach of the midges. 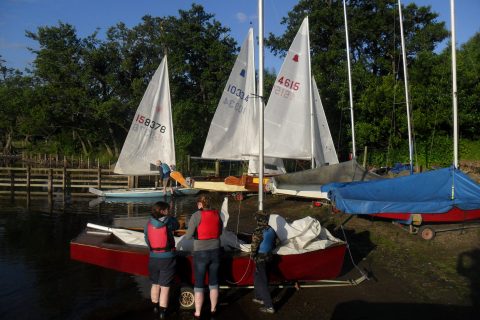 Plans were hatched for an early Sunday morning sail; nine brave sailors rose before 6 a.m. to launch their boats to see the sun rise over the mountains – takes some beating! So good, in fact, that it was almost three hours before they returned for a hearty bacon-and-egg breakfast. Undeterred by the rain forecast in the afternoon all the boats launched again after the sad task of packing the tents away. The youngsters played Swallow and Amazons again in the confines of the safe marina, although there were no reports of ‘grumpy’ Captain Flint – everyone was smiling all weekend. Some boats ventured south against the wind to the bend and narrows, where a freshening F3–4 breeze was developing. Decision to return back to base led to some exciting planing reaching and surfing on the waves. Change of crews gave everyone the opportunity regardless of experience to try the perfect sailing conditions; some for the first time on open water and discovering the love of sailing, debating what boat to buy and vowing to be back.