Welcome to the Worlds – introducing the Southport Swim Team

The 2018 Gul GP14 World Championships is set to be massive for the Class. With five months to go there are 108 boats entered and 31 sponsors signed up. As part of the build-up we are speaking to some of the fresher faces that have been tempted into the Class over the past 18 months and asking what the looking forward to about the event.

First up are two members of Southport Sailing Club; John Hayes and Ben Swainson. Both are relatively new to the travelling circuit and have fitted straight in. Ben fitted in with anyone who would have him until pairing up with Sam Watson and John rotated young and willing crews whilst occasionally falling out of the boat. Both enjoyed a little gentle ribbing of Greg Thomas when he was unfortunate enough to have capsized in the back of a fantastic pic of John and crew Joel James stonking along at the 2017 Nationals.

John gave up sailing 20 years ago before the lure of the GP14 was too much! His first season of Championship events in 2017 saw him

register a string of top three events, become the Scottish Champion and come second in the Super 8.

“I started sailing at age four in a mirror dinghy my dad built. He then made two graduates (one of which won a Nationals and Inland Championships). I then raced an Enterprise and managed to achieve two top ten finishes in the worlds (in those days the champs attracted over 175 boats) and then a 470 before retiring and taking up golf. Why I did that I haven’t got a clue.

“It was the 2016 24 Hour Race that got me back sailing, my first time back in a dinghy for over 20 years and it was in a GP14. What a revelation, and a massive wakeup call. I was so happy to be back in a boat and had not realised I had missed sailing so much.

“I like the GP14 Class as it has some very good sailors and strong competition. The Worlds will be no exception and I’m expecting it to be very tough. I can’t wait.”

After doing a long year of touring in 2017, what was John’s top event?! “The Irish Nationals at Ballyholme Yacht Club. A great venue, fantastic people, oh and 30 knots!”

And as to the final question you will have to ask Joel James if this is true, when asked what he was like to sail with John said: “I’m super calm. Joel trusts me implicitly!!”

Our second member of the Southport Swim Team has evaded any recent pictures of him in the water but there is a great pic from the youths that does keep surfacing on Facebook! Ben Swainson has gone from helming at the odd event to challenging for titles and takes on his biggest challenge yet, organising Sam Watson! 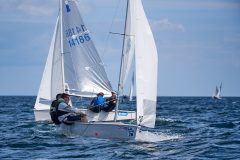 Ben tells us how he ended up filling the Andy Hunter void. “Sam and I teamed up after I scrolled through the entry list for the nationals last year to see he was without a crew. So, I sent him a message asking if he needed a crew. And as they say, the rest is history!”

And not a bad history in their brief time together finishing sixth at Looe in a borrowed boat with borrowed sails. “Other than the list of close calls, clumps of pulled out hair and putting my nerves the test, even driving two hours to South Staffs one day to find out he’s still fast asleep! But other than that, I can’t knock the lad! We’ve bonded so well over the last eight months. The banter in the boat is always good and we work well as a team. He always looks after me and helped introduce me to most of the people from the class I know now. He’s always switched on and is always positive in the boat. Which suits my positive style just as well.”

Ben is preparing well ahead for the Worlds – event getting Mr Lastminute.com Watson to enter six months in advance! “I’m preparing for the worlds as best I can by balancing as much sailing along with the final months of completing my Degree in Engineering,” explains Ben. “For me there’s no better prep for an event than time on the water. Slowly easing myself back into the gym as well, hopefully be at my peak come the Worlds.”

With the pair set to stay together for 2018 we asked Ben what it was he likes about the Class:

“I love how welcome I’ve been made into the GP’s. Over the past 12 months. I’ve gone from not really knowing anyone, to being on friendly terms with everyone! I also love how competitive the fleet is. No two races are ever the same, and it’s one of the few classes where a winner won’t be decided right until the last race. Which always makes for fun and interesting racing!

“With the Worlds, there isn’t much I’m not looking forward to! A venue I’ve never been to, an entry list of over 100 up to now. And a brilliant social calendar. But the venue is what I’m looking forward to most! Always exciting going to a new place not knowing what to expect.”

Find out more about the event and secure your place today for only £30, there is a 130 boat limit so get in quick!

We are looking for people who were at the last Mount’s Bay event in 2007 to share their memories of the week, if you are interested in being featured please email Michelle: [email protected]