What a tremendous weekend! Thirteen boats congregated at Maylandsea Bay SC on the 29th May including 12448 bought by local Mark Harman the day before.  Maylandsea Bay SC lies on Lawling Creek on the River Blackwater in Essex and with a varied forecast from 4 to 20 knots and Spring tides the event was always going to be fun and challenging! With nine visitors from as far away as Brixham and Bristol joining two local teams   five races were scheduled with two on Saturday and three on the Sunday where there was a slightly larger tidal window. 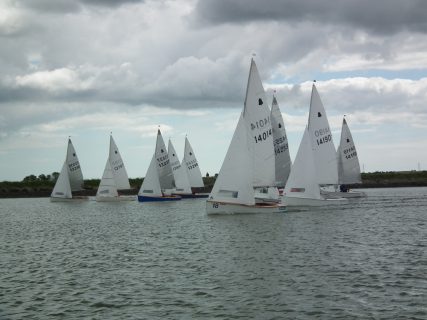 Race One kicked us off with light conditions and a beat out of Lawling Creek against the flooding tide. Tidal strategy was an immediate priority with Race Officer Paul Gray setting a first course out to Osea Island with three crossings of the main fairway.

Strategy was all!!   James Ward and Richard Whitehill from Papercourt Sc were first round the windward mark going left out of Lawling Creek while the majority stuck to the right. Significant gains were made by those who delayed crossing back to the eastern shore with Steve Cooper and Lucy Barrie from Welsh Harp Sc second followed by Maurice Cleal and Yossi (Wembley/Welsh Harp) and Keith Street and Denise vale also from Welsh Harp. Ward/Whitehill took race one from Cooper and Barrie with David Innes and John McGuinness from Frensham coming through to take third.  Race Two was a long affair with the fleet set a large triangle between Osea and Mundon Point and then a race back to the club line as the ebb began to flow. 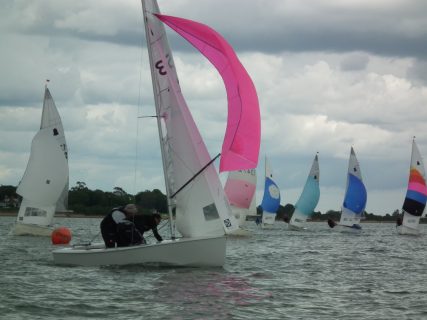 Cleal/Yossi took the windward mark from Charlie Cotter/ Sue Tomkins (Welsh Harp) and extended their lead to take the bullet with an excited Cotter/Tomkins taking the second from the chasing pack of Innes/McGuinness, Street/Vale, Andy Wadsworth and Cathy Howard (Brixham/ Welsh Harp) with Matt Hall/Kat Farnell-Watson from Frensham finishing 6th. 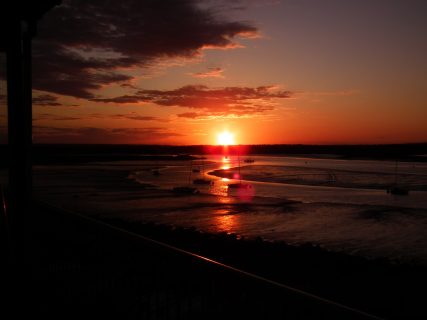 The club laid on a fantastic evening in their two storied clubhouse with sunset views over the Blackwater.

Probably largely thanks to Maylandsea`s encouragement of on-site camping for the weekend and extraordinarily cheap alcohol!

With no obvious leader overnight with both race winners carrying a significant discard there was all to play for. With a northerly forecast of 8 to 13 knots with expected rains the race Officer again set a start from Lawling Creek with Innes/ McGuinness initially leading after a port tack start at the pin end before Cooper/Barrie got to the windward mark first. Again it seemed to pay to delay crossing the stream with Cleal/Yossi and Ward/Whitehill coming through at the second mark. With the wind dropping as the threatened rain approached the race finished with Cooper/Barrie taking the win from Innes/McGuinness, Ward/Whitehill and Cleal/Yossi.  After the leading group finished confusion kicked in with Street/Vale and causing some chaos to the following boats.

As Race 4 started the fleet was hit by a line squall and strengthening wind under the rain clouds.  The race officer set a long triangular course in the Blackwater and Cheal/Yossi grabbed an early lead which they held until the end followed by Street/ Vale, Wadsworth /Howard and Andy Shrimpton and Roger Jeffs from Welsh Harp who were clearly enjoying the conditions.  Fifth was Cooper and Barrie with local team Dean Saxton and Mark Harman from Maylandsea Bay SC coming sixth.

With the wind now at 15 knots with heavy gusts Cleal/Yossi sealed the deal with an impressive win in race 5, followed by Cooper/ Barrie and Tomasz Szakola and Lucy Street from Welsh Harp taking third as the whole fleet enjoyed an exciting three sail plane of over 2 miles to the finish line.