It was a small but perfectly formed group of eight that decided to brave the inclement forecast and make the trip to Annandale Sailing Club for the Scottish Championships, part of the Craftinsure Super 8 Series, on 20 and 21 May.

Having not been to Scotland since a midge filled bite-fest at the beginning of the 90’s I was tempted into going back with tales of recent heat waves, stunning scenery and wonderfully hospitable people. At least one out of the three was true with the folks at Annandale making us feel really welcome. The scenery may well have been stunning if I dared to look up from under the peak of my cap as the rain lashed down for most of the weekend and the temperature plummeted.

Despite the arctic conditions (yes I am prone to weather exaggeration when cold and grumpy!) the boat park was jubilant with talk of the Inlands which most of us had been to a few weeks before. There was a side bet on whether Ann Penny would make it for the first race with her usual relaxed approach to timekeeping keeping her and Matt Caterall on shore while the rest of us tried the line. Alan Jones and Sue Watson (Bassenthwaite SC) had some bad luck while we were milling around with their main halyard snapping sending them back to shore.

Race 1 started in F4 and rain. The start was clean apart from Frank Nickless and myself (Michelle Evans) (Chase 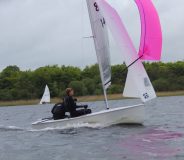 SC/South Staffs SC) who were over. In the first of many there was a good scrap between John Hayes and Joel James (Southport SC) and Gingerboats’ Andy Smith and Phil Hodgkins (Bassenthwaite SC) for the lead with John and Joel taking their first bullet of the weekend. With the wind all over the place the Race Officer did a good job setting the courses but the shifts did lead to biased lines. For Race 2 this caused a pile up and a general recall. The second start had one individual recall with, you guessed it, Frank Nickless and myself over again. Half

way through the race and the wind picked up to a F5 and the rain was replaced by a hail storm which then killed the wind leaving us to float round the course in what was one of the rare dry parts to the weekend. With Peter Collings and Paul O’Neill (Castle Semple SC) in third at this point there was a battle of slow tacks and wind whispering to see us pass them as we approached the line.

With the wind dead, the fleet voted with their feet and racing was abandoned for the day. In the evening the Club had laid on a fantastic 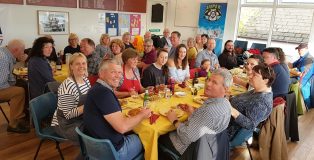 spread of curries and apple crumble for pud and the room was buzzing with sailing talk and, after a few glasses of wine, we all agreed that doing four races on the Sunday was a great idea. Come the morning and we were all regretting agreeing to the four races and some of us were regretting the wine.

At least it was dry first thing and I toyed with the idea of switching from drysuit to wetsuit but with 45 minutes to go the drizzle started and I checked my diary just to make sure it really was almost June! As the boats lined up for the first start the ever punctual Ann was still rigging the boat onshore. Luckily for her there was a general recall, and then another allowing El Presidente time to arrive in style and make the third

start for Race 3 clean. Unlike us that is and with a U flag up we were booted out of the race. By this point I was starting to think that Frank was aiming for us to set some kind of Championship record with 6 premature starts in a row if you count the generals. With the wind similar to the day before F4/5 but with some F6 slammers it was the turn of Andy and Phil to give a demo in heavy weather sailing taking a commanding race win over John and Joel. Elsewhere in the fleet Alan and Sue had their best race and a fourth and Annandale sailors Kellie Carmichael and birthday boy Tony Bamforth were showing good consistency.

With Quick Draw McNickless finally under control for Race 4 and we managed a clean start along with the rest of the fleet. Andy and Phil took an early lead from John and Joel and looked 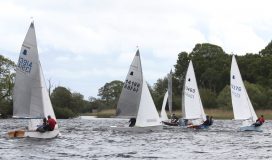 set for their second win until Andy Smith missed his toe straps and fell out allowing John and Joel past. Sensing defeat Andy and Phil dropped back until myself and Frank started to nibble away at them on the last reach and they pressed the zoom button to claim second at the finish. As we all went in for lunch the enthusiasm for trying to squeeze in another two races had definitely dwindled and on the water the race team agreed and so we set off for the final race of the event with Andy and Phil first round the windward mark followed by myself and Frank and John and Joel trapped back in the pack. With Alan and Sue out with another boat issue all the other boats changed places at some point apart from the eventual race winners Andy and Phil but it wasn’t enough to take the overall win off John and Joel.

As the racing ended it stopped raining briefly to allow us to pack our boats up and head for prize giving. Probably the loudest round of applause went to the ladies on the galley who provided lovely food all weekend and gratitude was expressed to all at Annandale SC for their hospitality even if they hadn’t arranged the sunshine! 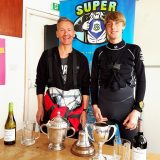 On water pics by Stephen Hinton-Smith