Reflections on sailing 24 hrs for charity

One month on from sailing the 53rd West Lancs YC 24 Hour Race on their own and two brothers from The Chase Sailing Club have raised over £1,700 for charity. 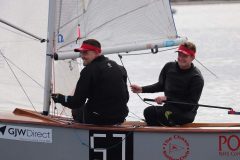 Eden and Josh Hyland are more usually seen racing single handed in Blazes but pooled their efforts for this years’ event to raise money for a charity that is close to their hearts, as well as fulfilling a childhood sailing dream.

Josh explains how they settled on their chosen charity: “We have had problems with mental health in our family, so we wanted to pick an organisation that doesn’t get much funding and helps those with mental health issues. So, the one we chose is POhWER which provides advice, support, and advocacy to people who experience disability, vulnerability, distress, and social exclusion. I don’t think we could have finished the full event if we didn’t have it in the back of our minds that we were doing it for such a good cause.”

Attempting the full 24 hours has been a dream of Josh‘s since he joined Chase 14 years ago but usually the lure of the bar has restricted their stints to a couple of hours at a time, until they bought a £500 wooden GP14 earlier to refurbish for the iconic sailing event. 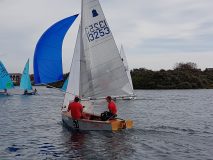 “We did the GP14 Worlds last year in a borrowed boat and really enjoyed it so had started to think about buying a boat to do up,” explains Josh. “As soon as we found one, I suggested doing the WLYC 24 hour race to Eden as I have always wanted to do it. The boat is Duffin number 13196 and it needed a lot of work! We completely stripped it down and re-painted, varnished and re-fitted it which took us a lot longer than we thought it would but thankfully it survived the full race and nothing broke. Thanks to Allen and English Braids for helping us with the fit out.”

Speaking on behalf of the Chase Sailing Club, Commodore Stuart Green said: “With various blocks and ropes still being fitted the morning of the event and Josh and Eden’s naturally relaxed approach to organisation we did wonder at times if they were going to make the start let alone complete the full 24 hours but they did themselves and the club proud, as well as raising a lot of money for a really good cause.” 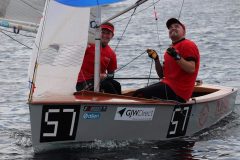 Not only did the brothers complete the race but they finished 11th overall, exceeding their own expectations, even if it did come at the expense of not being able to sit down for the week after!

When I ask the pair one month on how they felt about the experience Eden says: “We really enjoyed the first six hours, it was perfect sailing conditions in the context of the length of the event, with a gentle breeze and sunshine. Then at around midnight the breeze kicked in which woke us up, but we really enjoyed sailing in that kind of wind.”

“The hardest part for me was the last three hours,” continues Josh. “It was the realisation that we had been sailing for so long but still effectively had an entire days’ club racing at Chase to go. And by that point our bums were in bits!” 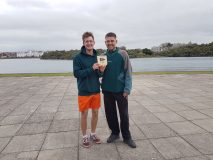 Before the race we just wanted to finish and maybe come in the top 30 so we were really proud to finish where we did. In general, it was a lot harder than we expected but remembering why we were doing it and the encouragement, sausage rolls and red bull provided by our club on the shore kept us going. When we did eventually finish with everyone cheering and clapping was quite emotional, and we are both amazed and thankful to everyone who supported us and donated.”