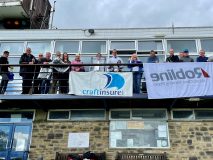 A fleet of 12 boats with 2 Scottish and 3 home boats were at Derwent reservoir SC for the Northern Areas.
Furthest travelled was Nick Craig and Tobytastic from Burghfield SC. The reception at DRSC was as warm as usual with free food for those dropping their boats off on Friday evening.

Saturday bought 4 challenging back-to-back races, bringing forwards one from Sunday due to the light winds forecast.  There were a couple of capsizes including gold fleet sailors John and Jack Telford. In the heavier conditions Nick pulled away showing the class of sailor he is; however, he didn’t go unchallenged as Adam and John were battling and ahead even in one race.  At the end of the first day Nick Craig was leading with 4 bullets followed by Adam and Tim McGovern with John and Jack Telford in third.

In Silver fleet Graham and Julie Courtney were leading Alan Jones and Sue Watson on count back with Arthur Logan and Iain Hardy in third silver having missed the first race due to technical issues, which were sorted out on shore.

The Bronze fleet was closer but with Paul ONeil suffering from bad food the night before at a local hotel and the local boat of Hender Blewett and Cat  Gingles  not completing all the races it was left to the oldest boat in the fleet 4615 sailed by Steve Parry and Oliver Gabbitas to be leading overnight.

DRSC hosted an evening meal and social which was a great chance to catch up with each other and for one sailor to play bingo for the first time. Nick continued his winning streak by being the first to have a line but was beaten to a full house by graham Courtney.

Sunday started with the lighter winds which had been forecast, this led to very close rounding of the windward mark for the top 6 boats from all the fleets. Nick couldn’t be caught on the second day so Adam and John fought for second place which led to some tactical sailing.

The fickle winds made it a difficult job for RO to set a course.

Nick Craig and Tobytastic won the event with 6 bullets and all the trophies bar the runners up. However, Nick could not fit all of these in his car so left one to be collected from the Inlands at Bala.

The Courtney’s from Bolton held onto first Silver place with Alan Jones and Sue Watson fron Bass in second. Steve Parry and Oliver from York sailing a series one and oldest boat on the water took first Bronze fleet

The first 7 boats were all wood.

Thanks of course to Robline and Craftinsure our series sponsors for the prizes.