The Gul 2018 GP14 World Championship at Mount’s Bay Sailing Club in Cornwall was supported by 35 sponsors and attended by over 500 sailors, family and friends. The event even had fireworks on the last night and live race tracking from Sailing Southwest.

All nine race were sailed over the week despite the first day having to be abandoned due to F9 gusts. Conditions throughout the remaining sailable days were generally F3/2 with the fleet treated to a variety of different wind directions and a very unusual sea state at the beginning of the event. Tide wasn’t really a factor, so it mostly came down to getting away cleanly and being able to hold your lane.

With 119 boats, relatively short first legs, and a very competitive fleet, competitors were often bunched together and rafted up on marks. This made overtaking downwind tricky and the sailing highly tactical. Unusually, all of the eventual top ten boats had at least two double digit results over the course of the regatta.

In a first for the Class, a Platinum Fleet of the top fifteen was introduced after the second day of racing. This was to acknowledge the truly remarkable quality of the entry, none more so this year than eventual winners Mike Senior and Chris White from South Staffs Sailing Club.

One of the most remarkable elements of their win was the turnaround after a disastrous start to the event. After the first three races Mike and Chris lay fourteenth overall, only sneaking into the Platinum Fleet. Following that their results included three race wins and a second and they finished a comfortable ten points ahead of second placed club mates Ross Kearney and Ed Bradburn. 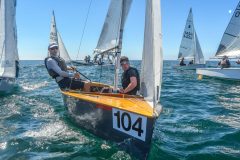 For Mike, it had been fourteen years since his last Nationals title: “It still feels a little strange to have won my first Worlds title. More job done, rather than a big ye-ha. Oddly I felt very little pressure on the last day. Chris and I agreed a plan for the last race and then just concentrated on executing it properly.

“The competition was tough, if you didn’t get the first minute or so after the start right it was very difficult to pull out a counting result. The only thing the event missed was a big 20+ knot day, which we were hoping for to shake up the results.

“I haven’t really felt any pressure to follow up on my last big title in 2004. I’ve been recently focusing on other things away from sailing. Perhaps this has helped me to not over think things. I also had a break from GP14 sailing for a few years in that period and I think Ian Dobson and Andy Tunnicliffe, Matt Mee and that generation came to the fore and really pushed things forwards. There was then an influx of other top sailors from Ireland such as Shane MacCarthy, Ross Kearney and Ger Owens. Most of the competition from the early noughties is still here competing, but the class has since become much more competitive and therefore attracting sailors from other classes to have a go.

“I think the unique thing about GP14 racing is that a well-cared for 23-year-old home build such as my boat Racey’s Rocket, can compete with a brand new boat, and that an athletic teenager, those with a young family and those who are more senior, all compete on a level playing field. The weight of the boat is often moaned about, or even ridiculed, but it is also its most important part of the boat, as it means there is a wide range of competitive crew weights throughout the fleet. The boat is actually one of the most fun to sail downwind in 20+ knots, and I can say that with confidence after having lots of experience of high performance boats. It is then probably the most comfortable and tactical to sail in 10 knots.

“However, the best thing about the GP14 class, and you could say why sailing in general will always be the best sport, is that after a day on the water you finish it generally with a few beers sharing stories of the what worked, what didn’t and what was funny. And then do it all again in the morning. I can’t think of any other sport like that.

“If I could give one piece of advice to other aspiring world champions I was say focus on enjoying the journey rather than the result. I think winning only comes from repeatedly failing as that is the best way to find problems, fix them and move forwards. Sailing is such a comprehensive sport that there are always learning opportunities every time you race. I have already made a list of what to work on from this event.”

Full results and videos can be found on the GP14 website: https://www.gp14.org/worlds2018/