Sandwiched between the Midland Championship at Chase the weekend before and the Inlands at Bala next weekend there were some worries about turnout to this event, but on arrival the car park was already busy with GP14 crews unpacking their boats, with a goodly number of the “usual suspects” among them, as well as some new faces. A fleet of 19 including 17 visiting boats from South Staffs, Chase, Midlands, North Staffs, Aldridge, Nantwich, Trimpley, Bartley and (eventually) Welsh Harp attended. The weather forecast was not encouraging with light to moderate winds and almost continuous rain predicted for the day and so it proved. 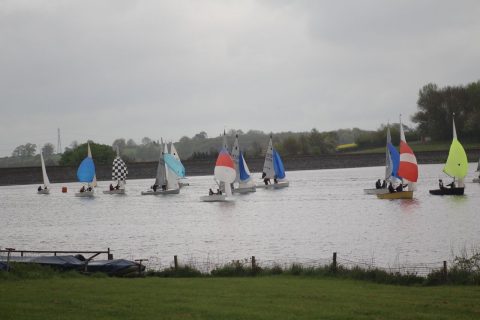 After bacon sandwiches and a briefing from PRO Grahame Newton, we set sail for the far corner of the reservoir for the first race from which a longish first beat was set towards the dam. The adrenalin however, was all too much and the inevitable General Recall was flagged and we all turned back to welcome late arrival Magic from Welsh Harp – it was clearly an act of kindness on our part in honour of his long journey up the notorious M1. The restart sequence featured the dreaded Black Flag of course, but nobody transgressed and we set off down the lake. The number of “Starboard” shouts gradually reduced and pretty early on Ian Willis/Keith Dutton emerged at the front of the pack and steadily increased their lead, taking the first race by a considerable distance. In second place was local expert Nigel Pepperdine with super crew Simon Forbes in the front seat and third were Richard Instone/Steve Parker.

After a tasty lunch (the hot Pea and Ham chowder was just what we needed given the November air temperatures), we were joined by the Miracles for their Midland Championship day 1 with 2 back to back races. With an amended course sailing the whole length of the reservoir, this time it was Pepperdine/Forbes who snuck to the front and hung on there, while Willis/Dutton climbed up to second from a poorish start and Instone/Parker came in third again. The wind had shifted round, so another excellent course for the final race saw Willis/Dutton make no mistakes to take the bullet (and the event) followed by Pepperdine/Forbes second and Instone/Parker third again. Good tussles were to be had all the way down the fleet and Silver fleet winners were Derek Fleming/Seonaid Young in 6th and Bronze fleet winner was local youth sailor Peter Nugent crewed by Charles Saunders in 15th. At the prize giving Ian Willis thanked everybody involved in putting on the event and all the visitors for coming and we left for our warm beds leaving the Miracle fleet to camp overnight in single figure temperatures – that’s Spring in the Midlands for you.