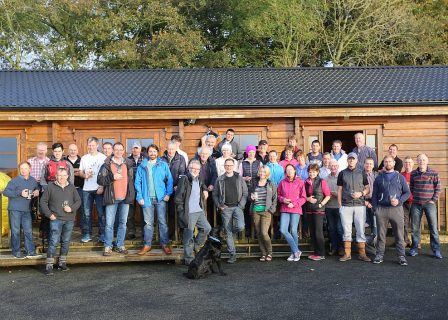 See the full results and more on the GP14 Ireland website

Racing began on Saturday on flat water and with the wind shifting in force and direction, some large gains were made and lost up wind. At the end of Saturday’s four races Shane MacCarthy & Damian Bracken had two race wins and Curly Morris & Laura McFarland and John & Donal McGuinness one race win apiece. With Keith Louden & Alan Thompson putting together some very consistent results, this meant that any one of four boats could potentially win the event going into the final day.

Race five began on Sunday morning with individual recalls. The McGuinnesses and Louden/Thompson teams decided to return and start correctly and together with the aid of some large shifts both teams moved through the fleet to finish 2nd and 3rd respectively. Morris & McFarland took the win after MacCarthy & Bracken were judged to have been on course side at the start.

Going into the final race the points were now much tighter. MacCarthy & Bracken still leading, McGuinnesses in second on break of tie with Louden & Thompson and Morris & McFarland in fourth place.

Thanks once again to Mullingar sailing club for kindly welcoming the GP14 fleet to Lough Owel and for their hospitality during the weekend.