Barbados may now be long gone but it is certainly not forgotten with Bala providing the ideal setting for the association’s ‘Rum Punch Reunion’, also known as the Gul Inland Championships

The second event in the Craftinsure Super 6 Series proved popular with the 34 boats from as far south as Poole YC and as far north as Derwent Reservoir SC making the trip for the two day event on 21 and 22 May.

With a strong gold fleet it looked from the outset that there would be some close, competitive racing and we weren’t disappointed with four different winners out of the five races.

The mid-week forecast favoured the heavy/brave but this died down to a manageable 20 mph average by the time the boats were being rigged Saturday morning. Bala is quite a long but relatively thin lake so with the south westerly wind on Day 1 this worked perfectly as there was one long beat and then zigzagging reaches back to the leeward mark before funnelling the fleet through a short gate by the committee boat on the way back up the beat. 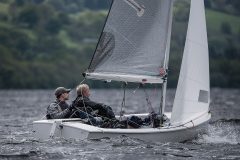 sailing on the seas of Poole and take up Inland sailing! With a commanding lead over Richard Instone and Jim Toothill (Blithfield SC) they took the win for the windiest race of the weekend. Race 2 saw Ross Kearney and Stephen Graham (South Staffs SC/Northampton SC) take first only to find out that they were over at the start giving the win to Ian Willis and Keith Dutton (South Staffs SC) and second to Andrew and Mark. The Poole boys were back in top gear for Race 3 with another storming win over Mike and Liz Senior in second. 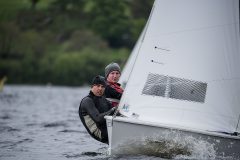 for taking the title with Mike and Liz Senior in second and the Southern Champions Nick Devereux and Geoff Edwards (Budworth SC) in third.

Bala SC have hosted the GP14s before but not for many years.
However, we clearly left an impression with Commodore Bob having promised to fully stock the bar and have back up supplies in case we drank them dry! The Club put a great effort into supporting the Bajan themed social with the bar suitably decorated and sumptuously stocked. The free rum punch started proceedings and giant Jenga proved to be more competitive than the on water activities with Nick Brandon (South Staffs SC) taking the crown. After a game of Killer pool it was off to bed, or off to drink more rum at the campsite!

The forecast for Day 2 originally looked very light and sunny so when the majority turned up to rig their boats in the morning to a gloomy backdrop and steady breeze it looked like another good day’s sailing was ahead.

Race 4 got underway and as always at Bala you needed to play the shifts well on the first beat to succeed, those who went left this time got a massive lift up to the mark with those on the right got dumped 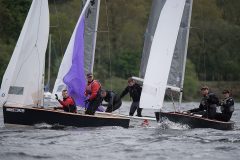 down to the back. Andrew and Mark were once again flying and when they crossed the line first it looked like the Championship was theirs, only to find out that they were over the start line and disqualified with Andy Smith and Phil Hodgkins (Bassenthwaite SC) benefitting.

By this time the wind was like a naughty child, all over the place and being chased round by the increasingly frazzled OOD.  Several attempts to set a course later and the fleet was sent in for lunch. We didn’t have to wait too long before it started to fill in so the signal was given to sup up and ship out. As the fleet sailed out for what turned out to be the fifth and final race we had just endured 10 minutes of complete, torrential rain that I would describe as a monsoon. Soaked to the bone, cold and grumpy we set forth clinging onto there being at least a decent breeze to make it all worthwhile. In fact as we surveyed the landscape around we wondered if we might lose the windward mark in the descending mist and gloom.

However by the time we had fitted in a recall the mist had cleared, sun had arrived and the rain had gone. Taking the wind with it!

With Andrew and Mark now carrying a 35th as their only discard they needed to finish in front of Mike and Liz to win. A fact that was certainly not lost on the South Staffs duo as they had a good go at trying to entice the Poole boys the wrong side of the line within the last minute to get them disqualified. With both boats ducking below the line with seconds to spare you could see the Ainslie-esque glint in Mike’s eye as, once underway, he skilfully sailed the unsuspecting pair through the fleet before picking his shift to tack off and cement his lead over them. The slow, windless race favoured those who use some kind of witchcraft to pick out whatever breeze is generated by a passing bird which Ian and Keith seemingly did to win. 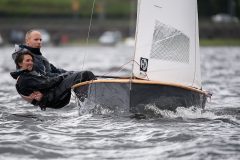 oldest boats, Nick and Geoff were one of the youngest competitors taking second overall and Ian and Keith were amongst the oldest competitors taking third. Sarah Jarman (Lymington SC) was the first female helm and with crew Ellie Devereux (Budworth SC) they were the first all-female boat in 18th. Dave Morgan and Richard Hodgkins (South Staffs SC) won the prize for sailing all the races at their first Championship event (after only eight months of racing!) and finished 30th.

The GP14 Nationals at Pwllheli in August will now see the current World Champion (Shane MacCarthy), the Inland Champions (Mike and Liz) and the Southern Champions (Nick and Geoff) fight it out at the top in what will be a fascinating contest and a rum filled event.

Thanks to Richard Craig from SailPics.co.uk for the photographs, you can view the full gallery here.

Event round up clip: