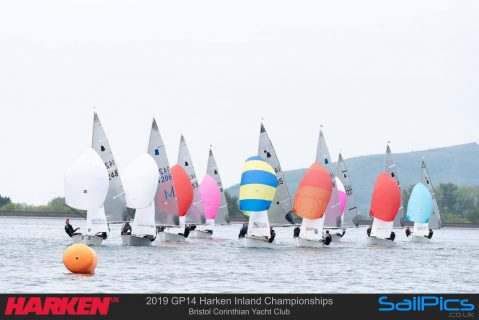 Wind wise it seems to have been feast or famine this year with this event forecast to be in the latter category. This will have no doubt put a few off travelling but they missed out on a great event. In the end 15 boats turned up to Bristol Corinthian Yacht Club for the Harken GP14 Inland Championship.

With three of the Super 7 championship events already completed this year it was Sam Watson who came into this event hot having already won the Midland Areas, Welsh Areas and the Northern Areas with a pair of Andy’s (Hunter and Thompson). This event looked to have his toughest competition to date with second at the World Champs last year Ross Kearney and Ed Bradburn in attendance.

At the briefing on Day 1 the RO warned us we may do up to five races in the day. Having got on the water in a F2 with shifty winds this seemed unlikely. The first race took an age to get away as the oscillating wind shifts lead to the sequence being abandoned four times as we were away on the fifth.

With the wind coming over the hills behind the club house the beat was a choice of going for the wind on the left or the lift on the right. Lawrence Creaser and Jane Kearney (Hayling Island SC/South Staffs SC) got it spot on rounding first and pulling out a steady lead throughout the race, looking un-troubled to finish in that position with Sam Watson and Andy Thompson (Nantwich SC/East Antrim) second.

The second race featured more re-starts of the sequence as the wind continued to shift around. When we finally got away it was James Goodfellow and Rick Cornes (Harwich Town/Burghfield) first round windward and looking good until an incident with Gingerboats’ Andy Smith and Phil Hodgkins (Bassenthwaite SC) left them doing turns. This left the other half of team Kearney to take the win with Sam and Andy second again.

At this point the ambition to do five races started to fade as we were signalled in to wait on shore and see if a sea breeze kicked in. We amused ourselves watching Maciej try to measure his rake with the top half of the mast buried in the trees. After half an hour the RO called it a day and all that was left was for the Protest Committee to enjoy some quality time with Maciej Matyjaszczuk and Andy Ferrington (Welsh Harp) who were the subject of not one but two protests in Race 2. Maciej Vs Ham lost Richard a result and in round two, Maciej Vs the Bolton Babes lost Maciej his result anyway. All was forgotten in the bar as the sailors were treated to some Bristol hospitality and Sam and Andy enjoyed their overnight position at the top of the leader board, albeit with the top five boats all within four points of each other.

Day 2 and the AP went up as we rigged as it looked light and shifty again. We got out half an hour late and had an abandoned start and then a general before we were away. The individual flag was up sending Ross and Ed back as Sam and Andy took and early lead. As they rounded windward and were alerted by the lead boat that they were also over that was their race over. The beat was true the first time round then it swung and you could just about lay it from the mark but with the swinging wind it was anyone’s guess if you would. Lawrence and Jane were back in the lead at this point and as we navigated the triangle/sausage/triangle course myself and Dodge (South Staffs SC/Chase SC) had worked our way up to second until a we went too wide at the leeward mark as we hooked round to the finish and Andy and Phil nipped in.

After having sat out for a race Sam and Andy were chomping at the bit to get out there and after a few general recalls Sam was calling for the black flag. We got the U flag but it made no difference as the fleet pushed again. Finally away and Sam and Andy were flying hotly pursued by Andy and Phil. They pulled out on the chasing pack of Lawrence/Jane, Ross/Ed, James/Rick and Ben Liffe and Richard Abendstern (Northampton SC). After a sluggish start myself and Dodge were working our way through and had a good run to take a couple of boats. The next beat we took a couple more and were up to third holding both Kearney boats off on the last reach.

After two races beating towards the club shore it swung by almost 180 degrees and settled with us beating to the opposite shore. We still didn’t get away clean although by this point I had completely lost count on how many restarts/reacalls we had over the weekend. With a bit more breeze Andy and Phil were dominant and won the race from Ross and Ed with Sam and Andy in third.

Going into the last race the championship could have gone one of three ways. Sam and Andy were leading on points but had a 16 to count from being lobbed so Ross/Ed and Andy/Phil were still in with a shout. Ross and Ed did their best getting into the lead but unfortunately for them Sam and Andy kept them in range in second. This left a gap on Andy and Phil and they were forced to take decisions they probably wouldn’t have wanted to in order to try and get a win. After that there was a battle between the irrepressible Richard Ham sailing with Charlie Cotter (Tollesbury), myself and Dodge and Lawrence and Jane. Trying to pass Richard was like a push bike trying to get round a double decker bus on a busy high street, he was having none of it and finished in third.

Winning the event, and looking in fantastic form, were Sam and Andy. Richard and Charlie won the Silver Fleet with James Ward and Richard Whitehall having had a great event winning the Bronze Fleet.

Thanks to Harken for sponsoring and Vanessa Devereux for organising. Pictures by Richard Craig of Sailpics.co.uk: here