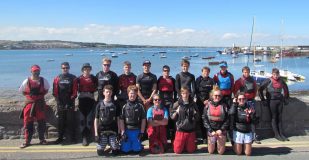 Sixteen enthusiastic sailors rolled up to Skerries Sailing Club Thursday 25th & Friday 26th of August 2016 for some training ahead of the GP14 Championship of Ireland. Youths from Youghal, Blessington, Greystones, Rush and Skerries were greeted with a beautiful morning and a mirror-like sea over the bay, great for the sun tan, not so great for sailing!

The Coach, Thomas Chaix, made introductions, boats were set up, and with a light breeze not forecasted until the afternoon at best, it was decided to start off with some theory for the morning. The start line (no better place to start!) was discussed in detail together with first-beat tactics.

After lunch, luckily a light breeze kicked in and we got to go out and practice some starts, beats and boat handling under the careful watch of Thomas. The wind was ideal for the 1st day of training so some could get used to GP14s, borrowed boats or new crews.

A few races ended the day, Edie & Emma from Blessington showed the boys up by pipping them on the finish line on first race. Loud and ecstatic with their performance they retired early to head to Dun Laoghaire to welcome home Olympic Medallist Annalise Murphy. After a few more races, we wrapped it up for the day.

The next day the wind was up and after more theory we hit the water. Things were a lot less forgiving than the previous day with almost everyone capsizing (a few times) until they started to get the hang of it. Some seemed to be enjoying capsizing a bit too much! 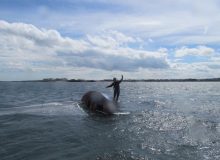 A lot of experience was gained during the session, with everyone’s boat control improving vastly and some very fast spinnaker reaches. After a break for lunch and with the wind not as strong as the morning we hit the water for one more short session.

After a number of practice races we finished early to take some time to relax and recuperate (for the weekend’s Nationals) after a hard day on the water!

Thanks to the ISA, Exe Sails and the Howard Davis Memorial GP14 youth fund for their contribution in funding the training event. The use of Skerries Sailing Club facilities was greatly appreciated also. And to Coach Thomas Chaix for sharing his expertise. It would not happen without some volunteers, so massive thanks to Helen Ryan from SSC on rescue and sandwiches, my wife Brid for more sandwiches and not to forget the campsite security guard, baby Dylan who made sure our back garden didn’t turn into a festival!

Many of the participants raced into the weekend for the Nationals. Well done to Adrian Lee & Edward Coyne from Youghal Sailing Club who put in a great performance and finished only a few points off the top 10 in a very competitive fleet.

Great fun was had by all.