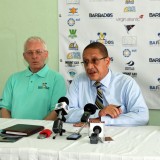 GP14 sailors and those from other fleets with over 100 boats from 7 different countries registered for the Easter event.

For a Class based predominantly in the UK and Ireland the popularity of the 2016 Worlds has undoubtedly got to be the location. By the end of March, Barbados will be flooded with around 400 sailors and their families looking to combine a top class event with a luxury holiday.

“We started with the expectation of forty or maybe fifty GP14s and to that point we even reduced the number of officials expected for the event because we expected a smaller event,” explains Peter Gilkes of the Barbados Tourism Marketing Inc.

Gus Reader, President of the Barbados Sailing Association, was also stunned by the numbers: “With 104 entries, the GP14 World Championships is the largest sailing event we have held in Barbados, and this means 208 competitors, 186 support personnel and officials, which brings it to a total of over 400 visitors to Barbados.”

The quality of the Gold Fleet has also been another factor in raising the profile of this event in the sailing community, tempting those from other fleets to join the showcase event.

Bets are on for who will win the event with the sweepstake entries coming in thick and fast with over 50 so far. It’s not often that Nick Craig would go into an event as the underdog but, according to the sweepstake entries, we have a clear favourite in the shape of current GP14 World Champions Ian Dobson and Andy Tunnicliffe.

No surprise there, considering the form book. After all, Ian and Andy enter this championship on the back of several consecutive World Championship wins. The second favourite for the win is Shane McCarthy, winner of both the British and Irish national championships last year. Nick Craig is picking up a lot of votes for either second or third, along with Mike Senior and Chris White, and Neil Marsden.

As with any GP14 event there will be opportunity for an upset if a call on the beat goes well for one
and wrong for another. Some of the other ones to watch will be Sam Watson (6th in Irish Championships 2015, 4th Nationals 2015, 2nd in the Grand Prix, former Youth Champion and 2nd in the last worlds), Nick and Ellie Devereux had a good travelling season last year and will be looking to top the silver fleet and the new pairing of Lawrence Creaser and Andy Hunter (who used to crew for Sam Watson) have top five potential. 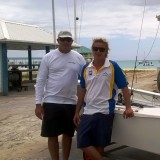 And what of the nine local teams? Jason Tindale and Robert Povey are have hopes of building on the legacy of Jack Hoad and Bill Tempro who won the first ever GP14 World Championships back in 1967.

Commodore at the Barbados Yacht Club, Geoffrey Evelyn, said: “When the whole event was proposed it was offering Barbadian sailors an opportunity to take part and I think eight or ten boats were shipped over for Barbadian sailors to use and they have been training for a month and a half. We even brought in an ex-world sailor Neil Marsden to coach the Barbadians. So I think we have some excellent sailors here generally. They may not be familiar with the boats as some other sailors but they are learning and I think they can do fairly well.”