If unbroken sunshine and a warm breeze is what you wanted for a weekend’s sailing then Bolton SC was the place to be, however if you were also looking for a steady wind and long true beats in preparation for the forthcoming GP14 World Championships then this event wasn’t going to be it!
Bolton SC put on the 2018 GP14 Northern Area Championships over the weekend of the 30th/1st July and the 11 visitors and 6 club boats were treated to an intense two days of seriously testing boat handling and close round the cans racing with boat on boat action throughout the entire fleet from the first gun right up to the finish line in every race.

The burning moorland of Winter Hill providing a dramatic back drop and you could be forgiven for thinking the heat was from those fires however all 6 races provided sizzling competition and a true test of inland water sailing. 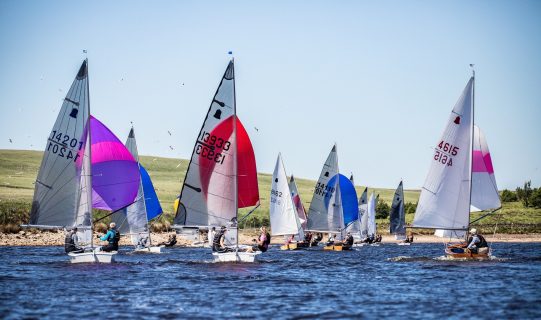 Andy Flitcroft and his race team got race one away cleanly and by the first mark most boats had put in more tacks that than they would probably expect to do in an entire race at Mounts Bay.  First to show were Neal Gibson and Geoff Phillips however luck was not to be with this pairing and they pulled a genoa cleat off and duly had to retire.  This left a battle for the top 3 between Mark/Sam Platt, Andy Smith/Phil Hodgkins and Sam Watson/Ben Swainson a pattern that would set the tone for the weekend.

Andy and Phil made the best of the variable conditions and were rewarded with the first bullet of the weekend ahead of the Platts however it was just behind that a valuable lesson was being learnt as Sam and Ben sailed around the outside of the finishing line allowing Gary Deighan and Dale Knowles to cross in third before they could correct their error.

The start of Race 2 was dominated by Gary and Dale who got off to a flier and quickly crossed the fleet on port leaving them in good shape at mark 1 however, as in the previous race things were very intense and places changed quickly with boat on boat battles raging across the reservoir.  Much shouting could be heard with regular use of the dreaded ‘protest’ word however, unfortunately for Sam and Ben this wasn’t backed up with the required red flag following a port and starboard incident and the resulting protest didn’t even get off the ground.  Andy and Phil once again secured a hard-fought victory with a very close finish giving Mark and Sam the edge over Sam and Ben who were now all too aware of the finishing line location.

By race 3 there were interesting battles developing in the silver and bronze fleets and having secured a fifth and eighth in the first two races it was Julie and Chris Waddington who held a slender lead in the silver fleet and Steve Parry and Jens Kuhn in the bronze.

The conditions started to take their toll both physically and mentally on most teams however, in the words of his crew “Justin Smith’s perception of distance and course reading seemed to be most affected” resulting in several spins and them sailing to the wrong mark twice in the one race.  Despite this Justin and Michelle were posting consistent results and although slightly dizzy took another creditable fifth in the final race of the day which was won by Sam and Ben breaking Andy and Phil’s hold on race victories.

The evening’s entertainment was combined with Bolton Sailing Clubs Summer Bash and a fantastic buffet was laid on by Liz and Andrew Craig before a band entertained all for the rest of the evening. With the sun having now set the raging fires on Winter Hill above the club were even more evident and there was more than an element of concern shown by those planning on sleeping under canvas at the club that night!

Sunday brought a similar set of conditions from those of the previous day however, as the boats took to the water for a much earlier start, it was evident that the gusts weren’t quite as strong but with back-to-back races planned it was still going to be a testing day.

More so for some as James Hockley and Alan Thompson launched minus a bung and literally saw their hopes of a silver fleet win sink. 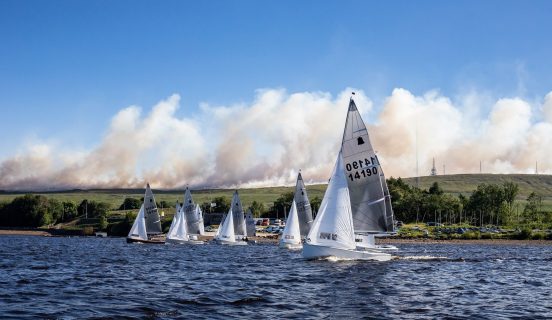 Andy and Phil continued their strong performance in race four until confusion over the next mark and an ill judged lay line let the two local boats of Mark and Sam and Gary and Dale get away to an unassailable lead with their own battle being won by Mark and Sam thus giving then their first bullet of the event.

The penultimate race of the day followed shortly after the last boat finished race four and once again shifty gusty conditions made the first beat a tricky one which Justin and Michelle handled expertly to lead round the first mark.  Unlike previous races the lead wasn’t to change and they held on for a well-deserved race win.  Mark and Sam recovered well from some early troubles in the race and with a second-place finish they ensured that the Championship would not be decided until the last race was complete.

With four different race winners and a very tight points situation the last race was always going to be a tense affair however, having seen his mate Justin take the previous race Adam McGovern and Eleanor Davies weren’t going to be outdone and showed first at the windward mark a position they also didn’t relinquish throughout leaving the battle for the remaining places going on behind. 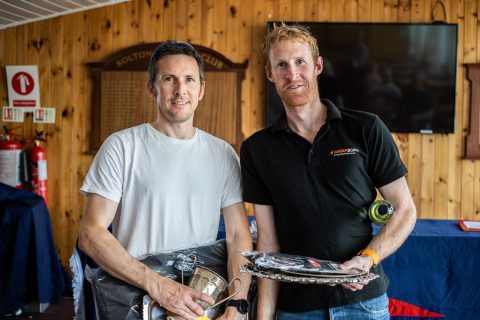 them and Andy and Phil’s superior firsts count handed them the Northern Champs with Mark and Sam second.  Sam and Ben secured third overall and the race win for Adam and Eleanor propelled them in to fourth.

Julie and Chris Waddington continued their fine weekend and took the silver prize with Julie also securing leading Lady helm having saved their best for last finishing fourth in the final race.  An equally impressive final day saw Zena Martin and Leanne Pilkington jump into top spot in the Bronze fleet a great achievement and a good confidence boost just before they head into their first ever GP14 World Championships later this month.