Runners & Riders for the Allen GP14 National Championships 2019 at SCYC

The last time I wrote an article for the GP fleet was way back in the 90’s and the infamous Nationals in Lowestoft. It was therefore a surprise to be asked to do this when I don’t really know anybody in the fleet anymore! However, the entry deadline has passed for the Allen GP14 National Championships 2019 at SCYC, and it’s time to take stock of who will be in the running for this year’s event. With 53 confirmed entries – which is good for the year after a UK Worlds, there are 22 Gold fleet teams all aiming for that elusive top 10 finish…

In no particular order:-

Mike Senior/Chris White – I’ve never heard of this pair but apparently they’re quite good. Current World Champs having come up on the rails at the end in a boat that is appearing on Antiques Road Show next year. Serial late night revellers and last to leave the bar…..but will probably win anyway.

Keith Louden/Alan Thompson – Always near the front in Ireland and provided Keith keeps Alan out of the bar all should be peaceful and fast. Their house sounds like it could be lively!

Jim Hunt/Liz Senior – Multi World Champ & talented sail maker but can Jim help Liz beat Mike!! In a borrowed boat but rumour has it they’ve been secretly practicing so could be fast.

Sam Watson/Andy Thompson – Fast, very fast and could be the ones to push Raceys Rocket all the way. Won a lot in Ireland this year plus a few area champs back here so if you’re looking at form these are the pair to follow.

James Goodfellow/Rick Cornes – I’ve a sneaky feeling about this pair, one of those you might put an each way bet on just in case all falls right for them, or you don’t mind losing a few bob. New boat, swapped roles and they’ve sailed together for a few years in Fireballs (still for sale if anyone wants one!?) so a good bet for a top 10 finish.

Ian Dobson/Gemma Dobson – Ian’s a multi GP World/National Champion now sailing with wife Gemma. They’ll be quick and in the top 10 easily plus fighting for the family trophy as apparently they get on well in the boat – are we sure they’re married!!?

John Hayes/Joel James – now sailing together in Fireballs. If it’s a light week they’re a good shout for something special. They won a race a few years back and could certainly do it again.

Lawrence Creaser/Jane Kearney – I’ve heard these are quick and have practiced lots. With a fair wind I recon these could be top 5 (then I’m only go off stats as I don’t know them personally).

Ross Kearney/Ed Bradburn – Apparently these are quite good as well having pushed Senior/White all they way at last years Worlds. I hear they’re very good at right hand side beats but are also quick all round. These should be fighting it out at the front of the fleet/bar again.

Mark Platt/Tom Platt – Finally, someone I know!! Mark’s a stalwart of GP sailing who seems to have made the progression from aft to centre main seamlessly. Sailing with son Tom they should make a top 10 place.

Well, that’s my top 10 put together. However, there are some dark horses lurking in the background…

Adam McGovern/Ellie Davies – very good at the Northern Areas and sailed extremely well at the Worlds last year. These could make the top 10 as they’re so consistent.

Tim Jones/Dale Knowles – another pair I know! They’ve been 3rd in a Worlds and the only thing stopping me putting them in the top 10 is that there is no boat entry (looks like Ciaran had first dibs on the boat).

Ciaran Jones/Sam Platt – serious dark horses if it’s light. Ciaran is son of Tim, Sam is son of Mark – if they were horses I’d put money on them.

Sarah Norbury/Emily Cole-Evans – Ex 470 Olympic squad member, Sarah has borrowed a fast boat & has a great crew in Emily (albeit one that hasn’t sailed for a few years). If it’s light and she manages not to reach up wind they could be in the mix. Nailed on for all woman prize though.

Hugh Gill/Joe Doherty – they’ll probably turn up with the boat in the back of the van, then sleep in the van during the week. Could be quick.

The McGuiness boys – fast in breeze and sailed together for years.

There are also a couple of Silver boats that could do well both having won open meetings this year, plus rumour has it Ian Willis & Keith Dutton have a house booked and will look at the forecast nearer the time (if it’s light I’d have them in the top 10).

Enjoy the weeks sailing and don’t forget to party!….

Finally, we would like to thank all our generous sponsors! Please support them in turn by visiting their web sites! 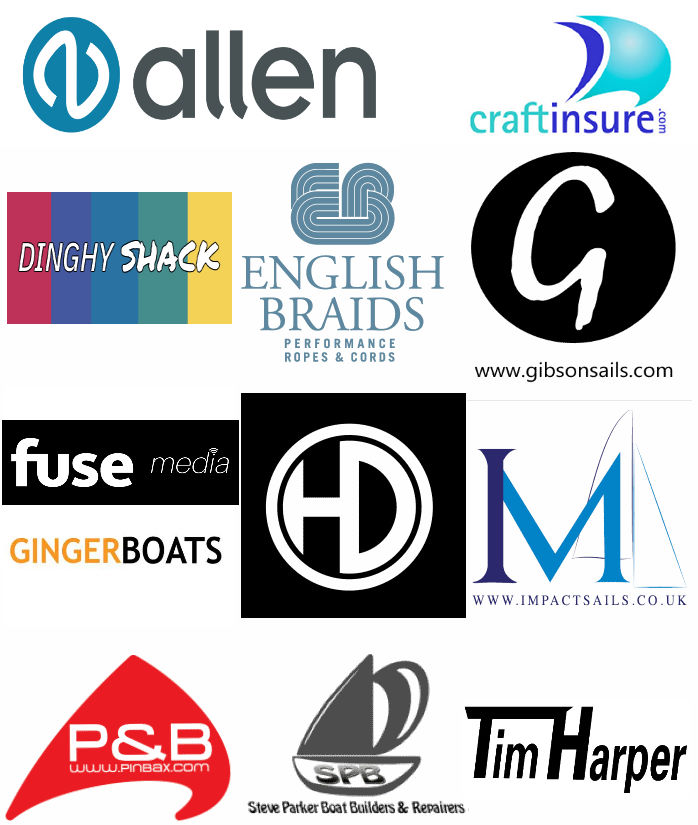