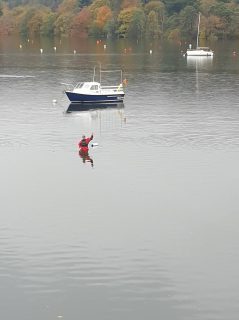 23 Boats from all over the UK lined up on the boat park at Bowness on Windermere to the scene of very high water levels and submerged jetties. The event was touch and go as a few days before heavy rain had raised the level of the lake by several feet. A judicious decision by the race committee at RWYC and a risk assessment deemed the event could go ahead safely. Fenders were tied to the end of the jetties and many hands allowed the boats to safely sail out into the lake where conditions were much better.

A last minute stand in by Nigel Tullet (commodore) in place of the stranded original race officer, allowed a start line and course to be set in the south end of the lake. Unusually the courses set were windward/leeward with a downwind gate so two leeward marks to choose from. As it turned out, the choice was a good one as it allowed a tactical run as well as the beat. 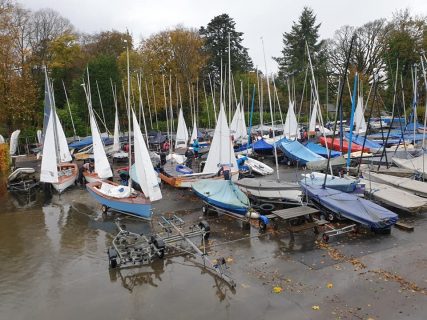 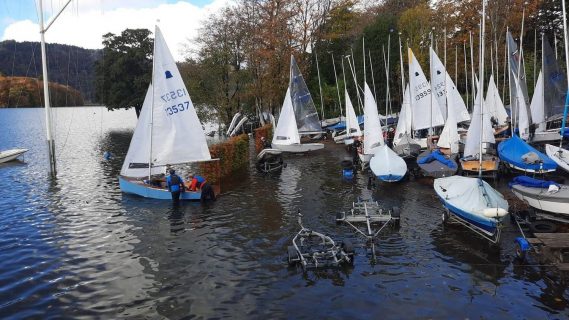 Race 1.
A clean start in a shifty force 2 sent the boats in a south-westerly direction. Arriving first at the windward mark was current national champion Sam Watson closely followed by David Lawson. The runs proved interesting with many jibes and courses available. What was more interesting was a particularly heavy gust that came through and caught a few boats out leading to a few capsizes. The right hand leeward mark proved most popular for the next beat. Sam maintained the lead up the beats with some tactical covering. On the last run the two leading boats took different courses with Dave Lawson leading for a while. Sam however played a smart move just before the finish and took the honours.

Race 2.
Again a clean start in the same direction lead to the same outcome at the windward mark with Sam leading closely followed by Dave. Again the runs proved tactical with a few changes of places. The beats also had a few shifts in them to stir things up a bit. Some close racing followed and on the final run Dave Lawson had established a lead. However due to some eagle eyed crews on 14064,  Dave and Mike had noticed that the shortened course flag had been raised. They sailed to the left hand mark and the finish line. Unfortunately some boats behind did not realise what was going on and continued as before. I little bit of shouting ensued and all boats finished correctly.

Race 3
The start line was slightly port biased on the 3rd start and a general recall was sounded. Not surprisingly the black flag was raised for the next start. Again the line was biased but most boats started cleanly. 14064 made a perfect start at the port end and had a healthy lead by the windward mark. Again the course was shortened but nearer the finish line so everyone could see. GP13326 of Chris Martin and John Tailby were also in the mix and finished a commendable 2nd. All the boats sailed in under spinnakers as the sun was setting in perfect conditions. The boats were met with an eager team of volunteers to help them land safely in the boat park.

The evening of the End of Seasons Championship is usually a black tie event and this was no exception and hosted excellently by the steward at Royal Windermere. The entertainment afterwards was also amusing.

Race 4 (Sunday).
The forecast for Sunday was very different to Saturday with some forecasting winds of 30mph and rain. The rain was present but very surprisingly the wind was not. So much so that it took over half an hour to reach the start line again in the south lake. The original OOD (Steve) was on station as the boats arrived and a start quickly ensued. The wind was slightly more southerly and some of the local boats decided on a right hand approach which proved to be correct. Recent converts to the GP fleet from Budworth, Russ and Ali Cormack were close on the tail of the leaders and so it proved with a 2nd to go with other consistent results. The course was a relatively short 2 laps which allowed Dave Lawson to take another win.

Race 5
The start was very busy in the middle of the line but some changes of position were taking place. Russ and Ali lead at the first mark closely followed by a large bunch of boats just making it around the mark. Again the run proved decisive with a number of changes of places depending on the gybe taken. The final run again had a twist in the tail with a large gust coming through right at the end allowing a fast plane to the finish line. The race finished with Russ and Ali taking the win but importantly Dave Lawson climbing back to 2nd.

Race 6
With a consistent set of results Dave and Mike had the luxury of an early bath and sailed in whilst the others got set for another start. The strong wind was still in place at the beginning and caught a few off guard leading to another general recall. The start finally got off cleanly as the boats made their way towards Storrs hall. Again the wind had the final laugh and an easterly direction began to play its part. This also proved decisive on the run and again some boats were caught out and capsized. The race finished again with Russ and Ali winning but experience proving its worth and all the way from Ireland Curly Morris crewed by Richard Street coming 2nd. 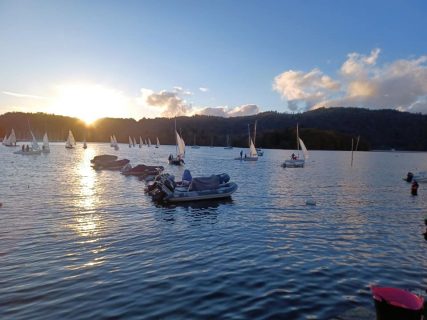 The event as always depends on the help of volunteers and Richard Rigg and his team made it possible by determination and a dry (drysuit).

Also a big thanks to Vanessa Devereux for organising the championships this year in very trying circumstances.

“GP14 End of Seasons from the middle of the fleet”

The weekend was dominated by the weather which threw everything bar snow to make it difficult. But with the determination of competitors, organisers and helpers we all had a great weekend. Sat after a hour postponement we launched by the hedge and sailed past the flagpole (both normally landmarks at the club!) over the jetties and to the south lake. With 2 meters extra depth that had arrived on Thursday and Friday. The car ferry lake steamers and pleasure craft all not running due to high water, the rocks well hidden we had the lake to ourselves .

It was sunny too, with the low sun making it hard to spot starboard boats, but good shouts and crash tacks avoided collisions !

The commodore Nigel Tullet stood in as race officer and set course L3 (windward leeward) with good long legs . After 3 laps I thought to my self this is going to be a hard days sailing. The wind was steady, course L3 again, and with a quick turn around we started race 2 . After two laps seeing the shortening flag was welcome.

We watched the 6 boats in front of us to see if they had seen it too ! All but one had. Unfortunately he did not hear the shouts possibly too far ahead? Or Quiet Irish accents?

Race 3 L2 (two laps) followed quickly and efficiently . You get in these big fleets and find you’re racing against the same boats that you sail against week in week out!

Returning to shore was fun knowing when to jump how deep it was ! And if Richard Rigg was standing chest deep on a jetty or not .

After a great evening social Sundays forecast came true, 8am pouring down with South easterly gale . By 10 it had stopped raining the wind swung southerly and we launched past the hedge as water level was now dropping .

The clubs race officer Steve Bewshire had dried his socks and took control sending us south again , but by now the wind had vanished and he had to wait for us to drift down to his start area.luckily it filled back in and built in pressure all day.

Three more races followed ,windward leeward with the downwind legs being as tactical as the up wind a few capsizes kept us entertained . 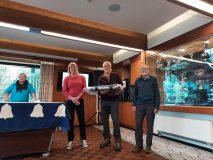 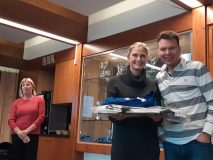 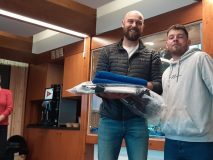 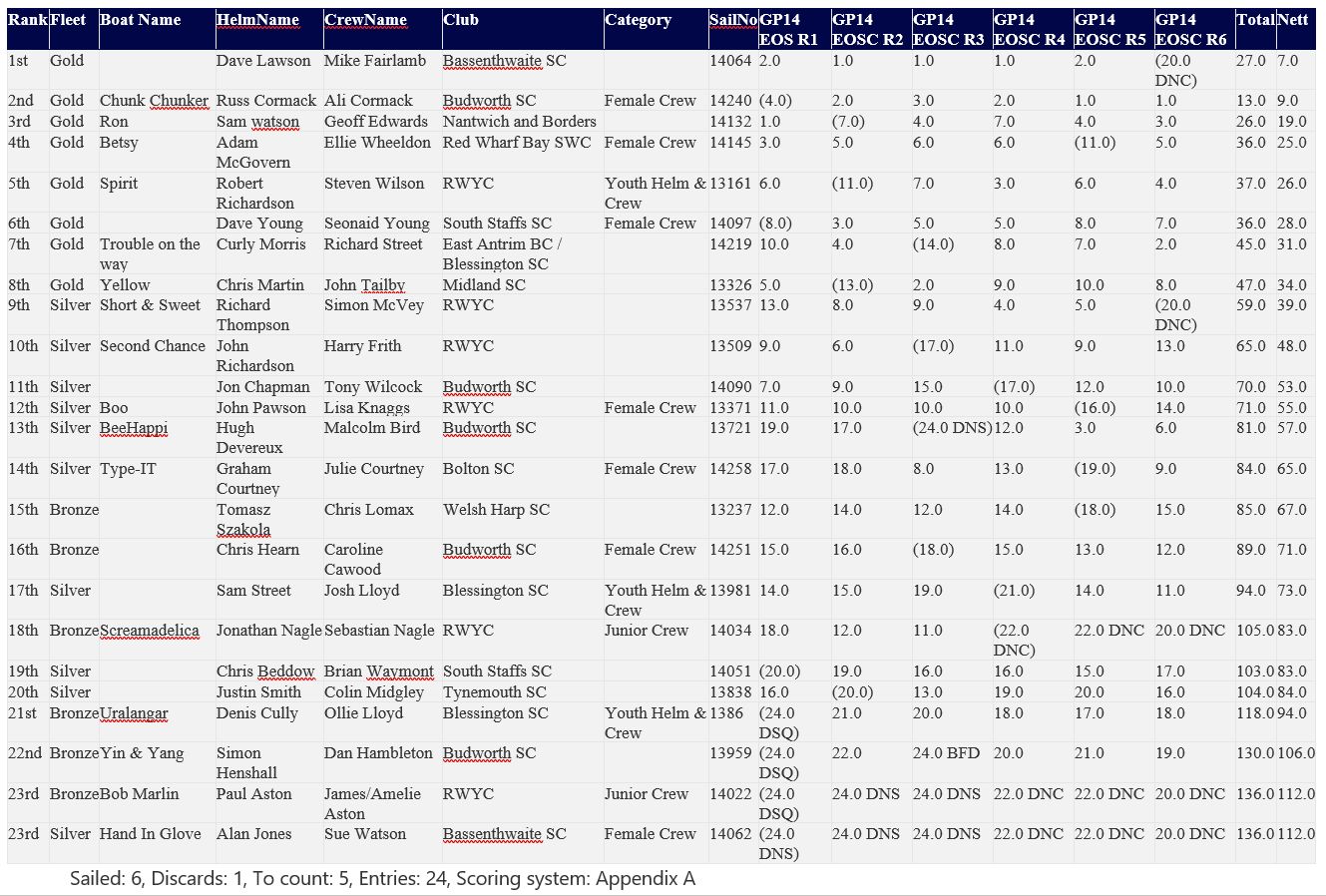