This is a fascinating article by Betty Armstrong on the history and restoration of GP 796 “Ventura”, originally owned by Ernie Mawhinney.
Betty Armstrong is Afloat and Yachting Life‘s Northern Ireland Correspondent and would have sailed against Ernie in her youth.
Ernie was also a contemporary of our very own President Curly Morris when they both started sailing GP14.!

There is also a slideshow showing details of the restoration on the afloat.ie website 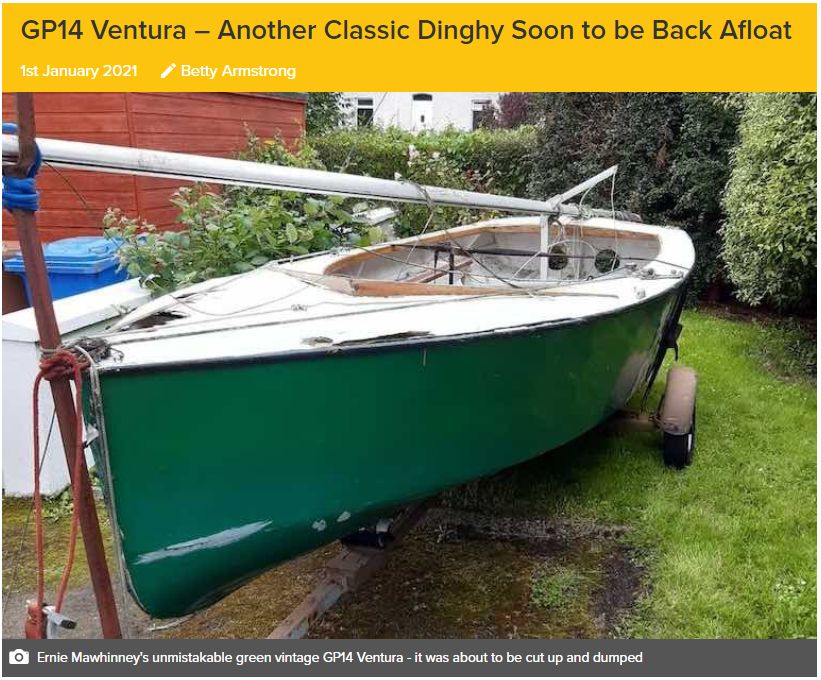 Think of the GP14 class in Ireland and among those uppermost in your mind, (depending on your age!) would be the late Ernie Mawhinney’s Ventura, one of the earliest in the class at number 796.

Ventura means ‘fortune, chance or luck’ but nothing about Ernie’s Ventura was ever down to chance or luck. Having built the boat himself in 1955 and sailed it skillfully and competitively until a few months before he died at age 83 in 2008, he would be delighted that it is now in the safe and competent hands of Derek McCune of Islandmagee and County Antrim Yacht Club at Whitehead on Belfast Lough. That year at the Ulster Championships, Sligo Yacht Club presented a new trophy to the Association for the sixth race in memory of Ernie Mawhinney and it was fitting that the wind dropped and the sun shone, Ernie’s favourite conditions in which he was hard to beat. The McGuinness brothers lead the race from start to finish winning the inaugural Ventura Cup and the final race of the Ulster Championships.

Derek is semi-retired and is pleased to have the time to do this restoration. Ventura, in its memorable various shades of green is now, hot on the heels of Nigel McNeely’s Two Buoys, the second GP that I’ve heard of in the last month to be in the process of restoration.

Ventura’s home was always on Belfast Lough; first the now defunct North Belfast Yacht Club at Whiteabbey and subsequently at Newtownabbey Boat Club which lost its clubhouse and grounds around 2002. Ernie then took Ventura to Holywood Yacht Club on the south side of the Lough, from where he sailed it until 2008. It was there, quite by chance, Derek McCune noticed it on passing the club grounds in August last year (2020). A conversation with two men at the gate revealed it was about to be cut up and dumped. A very quick decision on the spot and it was his!

Ventura stands apart. Ernie built it himself – he had the plans but at that time in the mid-Fifties, no materials. That didn’t deter him. He worked in Mackie’s Foundry, a textile machinery engineering plant in Belfast making sisal and hard-fibre spinning machinery, some of which was for the Indian market. The spare shipping pallets were the source of the wood for Ventura and to find a piece of mahogany was like gold dust.

His son, the late David Mawhinney, crewed for him, both safely kitted out with cork lifejackets bought from surplus RAF stock. Ernie was a brilliant helmsman, sailing a homemade GP14 with good gear and sails very competitively and in which he won many events.

Derek McCune who originally sailed and raced a Mirror, has taken on a mammoth task as Ventura had been lying for years at Holywood. It needed a new floor, side decks, and transom for a start and then there were multiple layers of paint, very few fittings but good spars. There were no sails, cover, rudder or kicker. He has saved as much of the original craft as possible. A shout out on Facebook for parts had good results, some of which Derek travelled to the South of England to collect, such was his dedication to the task. He has sails which he will use for club racing but for bigger events, such as the Worlds in Skerries in July 2022, he will indulge in new ones.

Before Derek took over Ventura, the last time it was afloat was when Ernie’s sons, David and Kevin, scattered their father’s ashes at Holywood and Newtownabbey, surely an appropriate and respectful action. Sadly his son and crew David died in 2019

Derek has worked on Ventura and also built a trailer in his garage, and currently has expert help from Alastair Duffin in his East Belfast workshop. “For the tricky bits” Derek said. He has high hopes of getting afloat soon. He regards himself a custodian of a valuable asset. “Ventura is a usable classic sailing dinghy and part of our maritime heritage. She’s 65 years old and I hope someone will be still be sailing her at least 50 years from now”.

Sailing wasn’t Ernie’s only passion. GP14 class President Curly Morris, another GP stalwart revealed, ” You know he played double bass in a dance band in the Kings Arms in Larne when we were starting to sail GPs and would give us a nod as we danced by. Later he played with a very good Trad jazz band”. A man of many talents indeed.