Much like the end of year disco at school (or prom depending on your age!) the GP14 End of Seasons is a final blow out for the Class with friends coming together to eat, drink and try and do each other over on the race course. With Headmistress Beddow delivering the school report, the Class was deemed to have had an A* year with the Barbados Worlds proving the biggest sailing event the Island had ever hosted to the numbers still managing to attend the rest of the Craftinsure Super 6 Series despite have no holiday left or diminished ‘go sailing’ credits available from non-sailing partners!

35 boats turned up on a worryingly calm looking Bowness morning for the sold out event. T

he buzz in the boat park though was anything but calm with current World and UK National Champions Shane MacCarthy and Andy Thompson (Greystones SC) unwrapping their brand new boat and competitors discussing the sailing, and more importantly arrangements for the black tie do in the evening. The Race Officer’s briefing outlined the two different course options and an intention to postpone sailing for half an hour to ensure the optimum wind direction for the day’s intended north course. As it was flat clam by the jetties we were instructed to take our tow ropes out and launch. Shane and Andy launched whilst still tinkering with their boat with a variety of power tools. The tow out gave us an opportunity to enjoy the beautiful Windermere scenery and debate if the clouds looked rainy or not and to be pleasantly surprised by the Force 2/3 that awaited us.

Finally out on the start line the course board revealed a three lap triangle, sausage triangle course. After an inevitable recall as the excited fleet pushed the line we set off. Watching the spinnakers hoist as they went 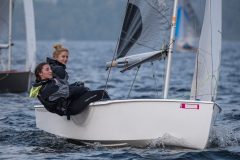 round the windward mark for the first time showed signs of a potential early upset with the Silver Fleet boat of Meg Hicklin and Hayley Ramadhar (South Staffs SC) right in the mix with Shane and Andy, Budworth’s Nick Devereux and Sam Platt and Sam Watson and Andy Hunter (Nantwich/South Staffs SC). As Shane and Andy got into the lead and opened up a gap it was Meg and Hayley that were chasing them down leaving the rest in their wake as they finished. Further down the fleet some realised to their cost that the course had changed between starts and an extra lap added.

Lining up for the start of Race 2 the majority went with the starboard end, a slight shift before the hooter meant that those at the port end were able to tack straight off and cross the fleet on port until the lay line. This lead to Tim Davies and Mark Collingwood (Chelmarsh SC) rounding first followed by Sam and Andy, Shane and Andy and myself and  Chris Beddow (South Staffs SC) in fourth. Finding ourselves on quite a tight reach and in the unusual position of the entire fleet bearing down on us Meg and Hayley snuck through followed by Greg Thomas and Joel James (Southport SC). Realising how much easier it is at the front rather than the back we enjoyed some close racing with Neal Gibson and Geoff Phillips (Redoubt SC) and John Hayes and Poppy James (Southport SC), not as close as they did though with a small collision and protest flag flying. At the front it was a day for the ladies with Meg and Hayley beating Shane and Andy and taking the overnight lead. As we came off the water two protests were lodged with Justin Smith (Derwent SC) protesting Duncan Greenhalgh (Bassenthwaite) in Race 1 and John protesting Neal in Race 2. As the group lined up outside the head master’s office the rest of us debated evening wear. In the end Duncan retired and Neal and Geoff lost but with no time to dwell on it we all headed to the Boat Club for dinner.

As at school there are always one or too rebels that don’t like to conform to uniform standards but the majority of us looked almost presentable in our glad rags. On route to dinner Shane and Andy Hunter proved to be the superheroes of the Super 8 pausing to rescue a stranded dog in the water and getting soggy in the process. The social at the End of Seasons has become as much a part of the event as the racing and a good night was had by all.

Day two was slightly more overcast and showed no sign of the Force 6/7 gusts that were forecast. We were informed that we would be heading to the south course as the RO seemed determined to give us a full tour of the lake. Sailing out to the course gave an indication of what was to come. On the same tack you could be on a beat, reach, run or hove to at any point.

The course board revealed a windward/leeward course which some hadn’t sailed before. With lightish and shifty 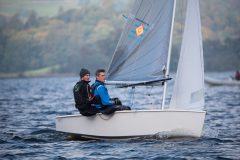 winds the day became tactical or flukey depending on your skill level. Nick and Sam took control of the third race winning but with Shane and Andy second, Sam and Andy third and Meg and Hayley fourth it all came down to the last race of the four race event. It looked like another silver fleet upset with Richard Ham and Vicky Ford (Tollesbury SC/South Staffs SC) leading for a good lap before being taken by Shane and Andy. Congratulations were premature though as they saw their second replaced with an OCS as one of a few to be caught over in a messy start where more looked to have pushed it but not spotted. The race finished with Shane and Andy first and Nick and Sam second, reflecting their overall placings. The battle for third (and first Sliver Fleet) went to Meg and Hayley with Sam and Andy having to settle for fourth.

Everyone was in high spirits at the prize giving, winning helm Shane at his first End of Seasons said how much he 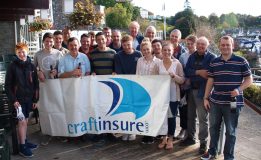 enjoyed the event for the racing and the social. Prizes were given for Fleet positions as well as to youngest helm Ralph Chaplin (12), youngest crew Szymon Matyjaszczu (13) and the highest placing vintage boat of Steve Parry and Phil Green (York RI). As the first event in the Craftinsure Super 8 Series it sets up nicely for what promises to be a fantastic year for the Class with eight UK Championship events in the series, included a return to Looe, and only three to count strong competition is expected.

Full results here. Thanks to Richard Craig from SailPics.co.uk for taking the racing pics. Photos from the black tie do and prize giving can be found on Facebook.

The End of Seasons has become one of those must do events of the season with the opportunity to get dressed up, get drinking and enjoy being able to sit around and chat all evening. With a black tie dress code most made an effort on Saturday, Richard Ham was even 50% in with the theme with a jacket, dress shirt and bow tie paired up with some casual grey jeans and ‘weathered’ brown shoes. The only other non-conformists were Sam Watson, Andy Hunter and Andy Thompson who sat together on the rebel table. Andy H gets a free pass though due to his earlier dog saving heroics and Andy T did at least look smart…

The Super 6 prize giving followed food. As winners Andy Smith and Phil Hodgkins weren’t at the event the shy and retiring Justin Smith leapt up to accept their trophies and make a speech. There wasn’t an opportunity for Naff Awards so a couple of posthumous mentions. Firstly, the confused.com award. Duncan’s fleet allocation was in the mix, is he bronze fleet, is he silver, no one knows! (he did rather well in the Super 6 regardless. Nick Brandon and Lisa Carpenter (South Staffs SC) apparently got a little confused as to which side of the island to go to on the way back in so plumped for straight into it instead but it has to go to Tim Davies an Mark Collingwood for missing the spreader mark in Race 1 and missing the ten boats shouting at them that they had missed it and carried on regardless.

Also confused were Meg and Hayley who tried to enter the event in the Bronze fleet as they were only there for the social. It was fitting that their relaxed prep for the event left them overnight leaders and most definitely not in the Bronze fleet. With the weight of pressure and expectation on them Hayley prepped for Sunday like and Olympian, only drinking water all night and leaving early for a good night’s sleep. Only joking! At least Meg was on hand to get Hayley safely home as she most definitely enjoyed the social. She wasn’t the only one though, after a day of crewing and the free wine on the table I particularly enjoyed a trip up to the toilets on the Stannah stair lift and there were others that went onto the local night club to enjoy one or two too many beers. All in all a great event thanks to all who made it such a fun event.