We’ve observed a general reluctance post-lockdowns for people to commit to travel to events especially a long way from home; and with a slightly iffy weather forecast it was no real surprise to find just 14 entries for the 2022 Robline End of Season Championship at Poole Yacht Club on 22nd and 23rd October. I’m sure we’re all working on ways to try and attract more competitors to events – any suggestions welcome to the class or your club. Being able to race in sublime scenery, only 10 minutes from the slipway clearly isn’t the only thing, but Poole certainly offers that along with some of the crispest race officing in shifty conditions that most visitors have experienced.

And then the Devereux clan became Covid positive and so they couldn’t join us – hope you are all recovering fine. So we sailed out with 12 boats on the start line of race 1. It was a twitchy south-southwesterly and the Race Officer Matt Hitt and his race team got things underway on schedule with a standard triangle-sausage-triangle course. Simon Redhead and Viki Fu set the pace and took the first race from Steve Thompson and Martin Boobyer with Paul Trubridge and Matt Hall third as boats sorted themselves out behind.

With a little more wind the heavies of Steve Thompson and Martin Boobyer made their weight count and pipped Simon and Viki in the second race. The race officer threw in a 4 lap windward leeward for race 3 before reverting to triangle sausage for race 4 including a general recall which heralded the only appearance of the uniform flag all weekend. Steve and Martin won both these but were unnerved on the triangles in lighter winds to see Jude Stanley and Oscar Hoult from Hayling Island planning in behind them on the reaches while their extra 40-50 kilos kept them squatly in displacement mode.

The evening dinner was well attended and enjoyed some very tasty food (though not enough to even up the weight imbalance) as well as wine and beers aplenty for those who like that sort of thing (Maciej). Maciej was heard commenting on the uncivilized hour for the start on Sunday morning.

Indeed, a very low wind forecast for Sunday looked like holding things up, but a 10-12 knot south-easterly blowing between Brownsea and Furzey Islands obliged.  Despite swinging to the south and necessitating the introduction of the alternate windward mark, the breeze held up for the final 2 races before dying on our way back into the club. There were lots of boats in Sunday’s mix with James Stafford and Dan Dunbabin winning race 5 while another local boat Tim Edom and Kevin McGrory picked up the 3rd podium place. And guest appearances from Maciej Matyjaszczuk and Sarah Agnew came through to win the final race with Ian Sparks and local class captain Mike Jones holding on to third place.

Overall the Hayling Island lads Jude and Oscar took third with fellow visitors Paul and Matt from Frensham Pond second. However Steve and Martin’s consistency could not be overcome with their 2-1-1-1-2-2 giving them the End of Season Championship.

Thank you especially to all those who made the trip. We look forward to seeing the GP fleet back in Poole again in the near future for more salty, breezy, competitive and convenient scenic sailing.

Oscar and his family holidayed in Ireland this summer first at the GP14 Worlds in Skerries and then at the Fireball Worlds. Oscar was planning on sailing the fireball but was convinced to set up and test the GP for his father and sister who were sailing in England at another event.  Coming back in from the set up sail Oscar was buzzing and so….. He entered the End of Seasons with his mate Jude.

Here is their first impression of sailing a GP event.

We both really enjoyed our first event in the GP14, and one we thought trumped laser sailing for its close racing and friendly fleet.

The courses used and similar ability throughout the fleet led to what felt like sprint racing but for 40 minutes and was exciting and tense. We found the boat to be manageable in all different wind conditions, and as the wind increased, so did the fun. Over the course of the weekend the amount we learnt and improved was massive, but we still have a long way to go….!

The race committee did an awesome job of running the event, and laid some perfect start lines and courses.

We both found the GP14 fleet much more welcoming than other fleets we have previously sailed in, and conversations on and off the water were friendly and enthusiastic.

We are really chuffed with our third overall, and after being presented with our two boxes of chocolate, cannot wait to race the GP again soon!

We look forward to seeing the lads at future events in 2023.

The report was written by Steve Thompson and Oscar Hoult with photos by Richard Craig of Sailpics. 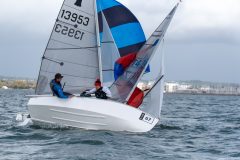 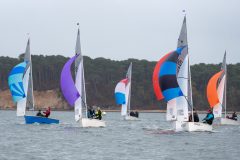 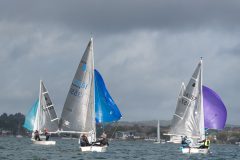