DINGHY SHOW 2018 Beats the Beast from the East 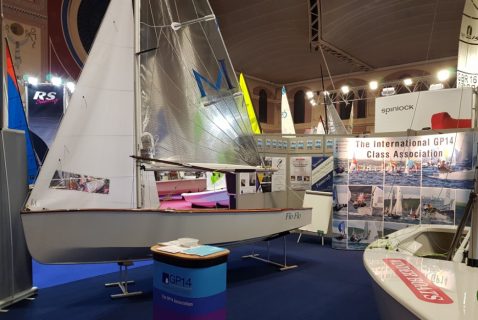 Snow was falling steadily as we built our Dinghy Show stand in near-freezing conditions in the Great Hall at Alexandra Palace on the Friday afternoon. But that unquenchable enthusiasm for the GP14 burned within us and by close of play we once again had a stand of which we could be justifiably proud!

Thanks to David Winder and Phil Hodgkins, together with David Innes and Nigel Potter, we were able to display superb versions of the boat in both glass and timber. With the help of Sailpics we had an exciting new backdrop screen and having attracted a goodly number of poster sponsors we were able to dress the stand in style. 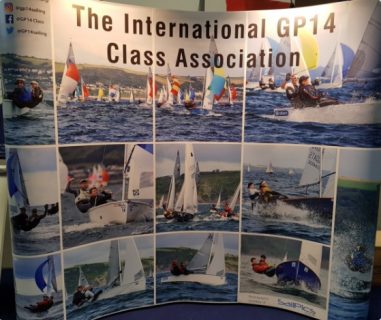 And thanks to Mark Collingwood and Justin Smith we incorporated our usual video corner. The status GP14 was further reinforced by the presence of Steve Parker with a pair of SP boats on a stand nearby, so the flag was well and truly flying.

With entries for Mount’s Bay well over the ton, the success of the GP14 Class was one of the hot topics of the Dinghy Show and we worked hard on the stand to reinforce the message, emphasising not only the great racing scene on offer but also our cruising and training activities.

This year the RYA included a new feature for the Dinghy Show in the form of the ‘Clubs and Classes Stage’, upon which all the sailing clubs and dinghy associations were allocated 15 minutes of fame. We landed the mid-day slot on the Saturday and with Justin handling the video technicalities, Ian Dobson, Helen Allen and I took questions from Ann about all aspects of GP14 life. Again, this provided an excellent opportunity to enthuse about the versatility of the boat, the value of the Association and why we all enjoy being part of the GP14 family. Both the audience and the organisers seemed to like it!

On Sunday we drew the Exe Sails genoa raffle, there had been an enthusiastic take-up so the ticket bag was bulging nicely when the winner was drawn and announced to be Kim Pickering, who was in fact at the Dinghy Show and able to come to the stand for a photo shoot with Ann! Sadly, the weather conditions in Devon had prevented Sam Woolner of Exe Sails from coming to the Show but Kim will be arranging to collect his prize and in the meantime we must thank Sam and his team for continuing to sponsor the Association in this way.

Rather like the snow around Alexandra Palace, the Dinghy Show and all its paraphernalia melted away on the Sunday evening as we headed home.

Was it up to the usual standard? I think so, but the weather did have an impact; several classes either did not make it at all or had to assemble a last-minute scratch team, and public attendance did not seem quite as high as that of past years.

Most of the visitors to our stand were either already keen GP14 owners or they were ‘front end racers’ from other classes who were considering jumping to the GP14 in order to enjoy the big-fleet sailing that will on offer in Mount’s Bay this year! And if that is not a sign of success, I do not know what is!

Thanks to all those who helped to make it happen