Day 1 at the Masters Championship

Sponsored by Robline UK and Craftinsure

A small number of boats arrived at Nantwich to find wet weather and not much wind, but enthusiasm prevailed and all were changed in time for  a briefing  from Paul Scott, the Race Officer 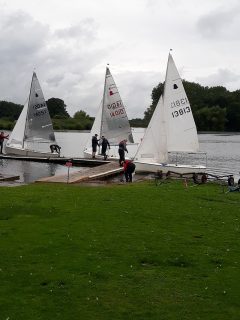 Race 1
The race started at 12 promptly, Andy Smith crewed by Phil Hodgkins soon took the lead, and then ensued a change of boat order every leg with the next 2 boats, Chris Beddow crewed by Brian Waymont regularly changing position with local sailor Dave Edwards crewed by his Grandson.  In the final 2 legs  Richard Binns and his crew Adam Campbell, who had never sailed a race before, shot up the order and finished 3rd.   David Morris of Budworth S.C crewed by Malcolm Bird were in the mix for a while but then dropped back.   David had never sailed an away meeting before and with a new Crew.

Race 2
After a break for lunch the intrepid sailors launched their boats for the start of Race 2.   Andy Smith in 14261 and Chris Beddow in 14051 were quick off the start line and soon put in some distance between them and the rest of the Fleet.   Richard Binns and crew Adam pulled through the rest of the boats and were in 3rdposition halfway through the race.   A troubled spinnaker hoist lost them 3rd place, but not to be deterred they soon speeded up.   Pete Thoms pulled through the fleet to 3rd place, his best result so far.  Andy took line honours, followed by Chris Beddow. 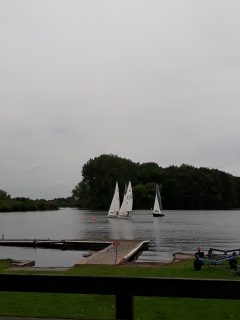 Race 3
The wind has now dropped to 4mph and in 1st place round the windward mark is local sailor Peter Thoms.  All have decided that spinnakers are not an option.    Andy and Phil were 4th half way through the race but in the final 2 legs with the wind slightly stronger they made massive gains and just pipped Peter Thoms to the finish line.   Chris and Brian finished 3rd, Dave Morris 4th, Richard Binns 5th and Dave Edwards 6th.

Thanks must go to Paul Scott and all his on the water crew and to Jean and her helper in the Galley.

A dryer day and more wind from the west.   The 11 o’clock start saw an immediate separation of the boats, with Andy and Phil taking the lead, Pete Thoms , with his local knowledge of the shifty winds took 2nd closely followed by Chris Beddow.    But a close encounter resulted in turns for Chris and Pete shot off.    After that 14010, David Morris and 14051, Chris Beddow fought out 3rd and 4th place for most of the race with Chris having to do more turns at the penultimate mark.   But in the final leg Chris got away for a 3rd place and Richard and Adam in 13555 who had by now caught up with David finished 2 boat lengths apart in 4th and 5th.   After this race a discard kicks in and things are looking very close between the Grand Masters and the Great Grand Masters and the Ton up.

The wind strength is holding and spinnakers are flying well. Handsome Dave ( his words) held onto 2nd place with a clear leg ahead until they brushed the mark and then they had to put a penalty in relegating them to 4th but with huge effort and directions from the crew, Malcolm, they pulled it back to 3rd.  Andy Phil 1st ,Pete and Dawn 2nd

The 1st general recall of the weekend with 5 boats well over the line at the Port end!  With a 2nd attempt all were clear and set off for the deciding race for the Ton up prize and the Great Grand Master.  The first half of the race saw the first 3 places changes almost with every tack.  But the pecking order became clear eventually with Andy and Phil gaining the lead, Pete and Dawn in 2nd and Chris with Brian 3rd.   David and Malcolm finished 4th, Richard and Adam 5th and Dave crewed by Andy 6th.

A big thank you must go to Nantwich Sailing Club for their hospitality, to Paul Scott and his on water team and Jean and all her helpers in the Galley

Thank you Robline UK , our Championship Sponsors, for your generosity.