Sunday 5th June 2022 was the cumulation of a long weekend of the Queens Jubilee events at Budworth SC where the main sailing showpiece was the long awaited GP14 open which was the next event of the GP14 Northern Bell series. A fantastic turnout of 22 boats,  with 19 Budworth boats making up a strong home contingent and 3 visitor boats, with the furthest traveller being Adam Chaplin and Sam Lowe from Blackpool & Fleetwood SC. 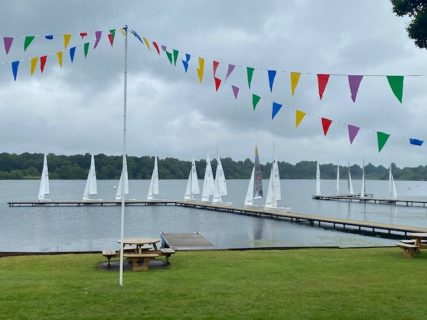 Budworth GP14 fleet is one of the most competitive at the club with 10-12 boats regularly racing on both Wednesday and Sundays and is growing with 30+ active boats. It was also a chance for the club to demonstrate some of the reasons why it won the RYA Club of the Year in February, one of which was its ability nurture raw talent from both junior and adults to feed into the competitive fleet racing for which it is well known on the regional/national racing circuit, especially for GP14’s.

With a light north easterly breeze and rain clouds looming the day started early with John Close – the official GP14 association measurer – arriving on site at 8am to begin weighing in a good number of boats for the day’s racing and upcoming national and Worlds events later this year, with 9 boats partaking in the opportunity to trim any excess weight before racing began.

At 10.40 we held our pre-race briefing held by the PRO for the day Tony Wilcox, ARO Kevin Gerald and Jon Chapman on safety rib duty. for the 22 boats that had entered the Open. There were 19 Budworth boats making up a strong home contingent and 3 visitor boats, with the furthest traveller being Adam Chaplin and Sam Lowe from Blackpool & Fleetwood SC. 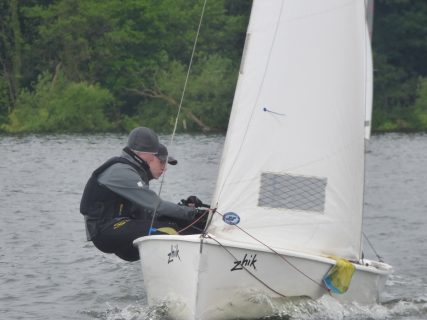 Race 1 started with a very competitive approach to the start line that saw two boats over the line at the start and made to go back around with the rest of the fleet getting away cleanly to make the most of the light wind that seemed to shift up to 70 degrees to keep everyone on the toes. First boat to the mark was helmed Simon Joyce/ Rosanna Joyce with the sibling team building a healthy lead by the time they rounded the mark. As per so many dinghy races, a great start, clean air and being first to the mark makes you difficult to pass and so it went with this race as Simon and Rosanna finished first in boat 13875. Hugh Devereux and Malcom Bird came second in 1372 and Gary Howland/ James Hughes in boat 13874, which they commandeered for the weekend as a scratch team, came a close third.

Following lunch, everyone was ready and willing crack on with Race 2.

The start line was widened to prevent higher levels of congestion and to get all the boats off to a cleaner start, which worked wonderfully to make the first beat ultra-competitive as every boat got off the line and fast. Such a start duly ignited many calls for ‘starboard’ as a number of boats had an excellent tacking battle down the mere where the decision to stay on starboard played out against the other half who tacked earlier to port.

First to the mark this time was a home boat featuring Bill Kenyon/ Sian Baird in 14140 showing their mastery of the local shifts to get the better of visitors Sam Watson/ Matthew Birks in 14132 from Nantwich & Boarders SC. The wind picked up to 8-10 knots giving the welcome chance for all the crews to jump up to the thwarts and stretch their legs from the confines of the front cockpit. During the second lap Sam Watson took the lead from Bill Kenyon after taking advantage of the stronger winds to move Bill into second and Hugh Devereux into third.

The stage was set for Race 3 with 5 boats on level points from the gold fleet going into the last and final race.

The tension was palpable during the coffee break, who would win? 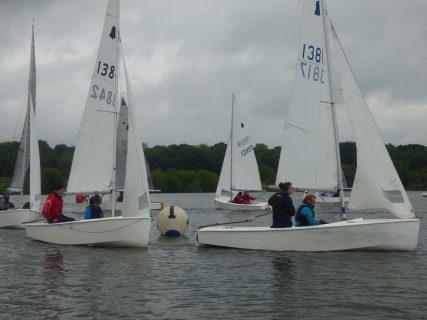 Shortly before the start, all returned to their boats on the jetties, the wind decided to retreat to 3-4 knots and brought more rain, albeit lighter than earlier in the day. The course was set on the committee boat to adjust for any last-minute wind shifts so that all knew what they had to do to win the day.

With tensions high, it was unsurprising that two boats were just over the start line and were caught out, but both made a super-fast recovery and made it back before the last of the fleet were over. First and second to the mark was a repeat of Race 2 to set up a thrilling finale to the race, but this time around Bill and Sian managed to keep Sam/ Matthew behind them as the wind died even further to barely a whisper which caused several members at the back of the fleet to fall foul of the +30 mins finish. But not to worry, as this would act as their discard with two out of three races to count.

Once everyone had safely packed their boats up for the evening, a short presentation was held in the bar to present to the overall winners on the day with Bill Kenyon/ Sian Baird in first place, Sam Watson/ Matthew Birks second and Hugh Devereux/ Malcom Bird in third. All well earnt and thoroughly deserved winners.

At Budworth we also have a Silver fleet trophy that was won by a young and upcoming team from the junior ranks in James Alexander and Joe Mills. The Bronze Fleet trophy was won by two new members who are also a father and daughter team – Mike & Nina Martin – who had entered their first ever open meeting. There will certainly be no doubt that there will be more to come from these boats in the future as they progress up the fleets.

Special thanks go to the support from GP14 association, CraftInsure and the main sponsor of this open for prizes from SixTownsGin.co.uk