Having last sailed a GP14 off the white sandy beaches and warm steady breezes of Barbados it seems only natural that Neil Marsden and Derek Hill should dust off their boat for the Bolton GP14 Open.
Just in case that wasn’t example enough of the lure of Bolton SC, where else would you spend your 21st Birthday, Ellie Devereux? …

And Bolton didn’t fail to deliver with a typically grey, misty and drizzly morning to welcome the 9 travelling and 7 home boats to the 2017 GP14 Open.
The Saturday had seen 6 teams eager to learn the finer art of GP14 sailing take up the Association’s training day at Bolton SC and all the feedback suggested everyone involved got a great deal out of the training provided by Ellie Devereux.

On the Sunday a gusty, swinging, southerly force 4 blew down Belmont Reservoir causing a few headaches for Andy Flitcroft and his OOD team when setting a course, however, shortly after 11am the fleet began the first beat up towards the dam. With little opportunity to approach the first mark on Starboard and some confusion over which was the mark a large portion of the fleet found themselves some way past the port lay line footing off to charge into the mark on port. It was Mark and Sam Platt that showed at the front of the fleet followed by Julie and Chris Waddington which turned out to be their only highlight of the event as things deteriorated from there. Blackpool and Fleetwood’s Neil and Derek were hot on the heels of the Platts and this battle was to be the predominant pattern of the whole day.

Neil and Derek got the better of Mark and Sam as the race went on and they took the first winners gun of the day. A solid and consistent performance by Hollingworth’s Adam and Tim McGovern saw them come in 3rd to complete the first race podium.

Following lunch it was clear the gusts had a little more strength in them and the rescue crews were going to be busy in race two, in fact just before race two in the Waddingtons case. Southport’s Greg Thomas and Poppy James had a stunning first beat and established a nice early lead but, as in race one, it would be the battle between Neil and Derek and the Platts that would decide the race win as they both closed and passed the early leader. Once again it was Neil and Derek that edged ahead for a second race win and ultimately the Open meeting victory with Mark and Sam once again second.

The challenging conditions had taken their toll on the fleet and 6 boats chose not to head out for the 3rd and final race. Bronze fleet sailors Zena Martin and Leanne Pilkington only managed a sip of tea each before they had to head back out to race, but head back out they did, and they were rewarded with their best result of the day finishing 7th giving them an overall 8th position to secure the pair a very well deserved bronze fleet win.

Welsh Harp’s pairing of Ed Coyne and Szymon put in a great performance in the tricky conditions finishing 2nd in the last race and were duly rewarded with a worthy Silver Fleet win finishing 6th overall. At the front, the Platts took a comfortable win securing 2nd overall with the McGoverns once again in 3rd and therefore 3rd overall.

Special mention was given to David Ivins for completing all 3 races competitively in very testing conditions at a mere 81 years of age. 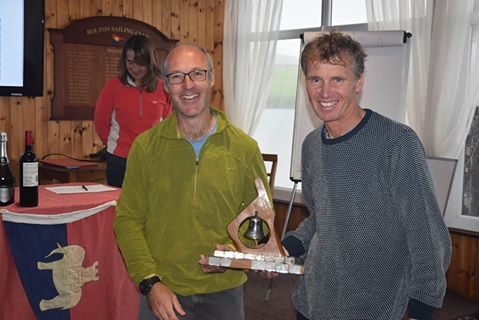 Finally, all that remained was for Neil and Derek to collect the Bolton SC GP14 Open prize and for Neil to thank Bolton Sailing club before all the travellers headed back off home.