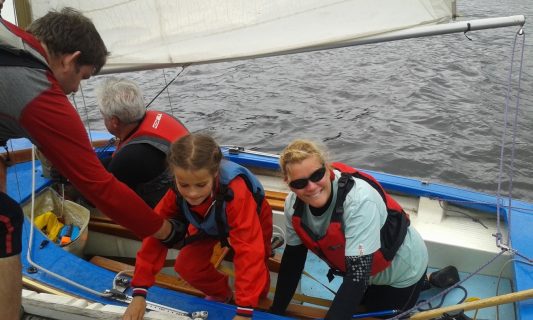 Many GP14 sailors prefer to relax and cruise with their boats rather than race.   There are also a number of members who very proudly own some of the very earliest vintage boats of the class.

In the UK both these groups of members are represented by Oliver Shaw, who oversees and coordinates primarily our cruising activities over the year,  and also co-ordinates activities for our vintage fleet.

Oliver can be contacted on email via [email protected] and if you have a cruising activity at your club to which you would like to invite Association attendance he would be pleased to hear from you.

Following the relaxation of Covid restrictions we are once again in business!

Hoping to see you on the water,  and keep safe.

A varied group of 25 persons in 7 GPs enjoyed a very  successful Cruising Week on the Fal estuary,  hosted by Restronguet Sailing Club,  where  Richard Moore,  our Cruising Rep’s oldest sailing friend (we go back 52 years),  and an erstwhile GP14 sailor who is very well known within the GP14 cruising circle,  is one of their Rear Commodores.   The location is a very scenic cruising area,  and deservedly popular.

And by skilful foresight(!),  the week ended just in time to miss Storm Evert,  which caused such destruction across the south of the country,  particularly in West Cornwall  …

It was good to have a balance of old hands and newcomers to the cruising fleet,  and also good to have a balance of ages from teenagers through to late septuagenarians  –  and everything in between.   While most of the visitors were from the Northwest of England it was good to also see Duncan Greenhalgh (a Past President of the Association) and his crew,  Colin Quint,  who had travelled from Scotland for the event,  and Tamsin Moore from Pembrokeshire.

All gelled very well,  both socially and on the water;  and all were immensely enthusiastic about the week and keen to book for next year.  One comment received was that this event sets the bar for the future,  and will be a hard act to follow.

A fuller report on the week will appear in the Autumn issue of Mainsail,  but we don’t wish to pre-empt that here,  so this report is very deliberately short.

Please note that this course is now over-subscribed,  and we have started a waiting list for the next iteration.

Following the success of what may have been our first ever Advanced Cruiser Training Course last September,  on the non-tidal Graffham Water,  we are now planning a tidal version on the intensely tidal waters of the Mersey,  hosted by Liverpool Sailing Club.

This is aimed at those who are already basically competent dinghy sailors,  and the intention will be to now equip participants with the specific additional skills for independent cruising.    The course involves both shore-based training and time on the water,  and will include at least one short day-cruise.

In passing,  it will also equip participants for the cruising skills needed for cruising in an organised fleet event,  since if you have the skills to cruise independently you can take organised cruising fleet events in your stride.

The date is currently set for a 3-day event from Friday 24 to Sunday 26 September,  which will include an upriver cruise on the Sunday,  probably up as far as the Runcorn Bridges.

Expect the course to be fairly intensive,  and to include reefing systems (and much practice in using them),  masthead buoyancy,  alternative propulsion,  communications systems,  MOB recovery,  tiller brakes (etc.),  tide predictions,  charts,  keeping up the position,  passage planning,  Colregs (a.k.a. “rule of the road”),  use of transits,  anchoring,  mooring,  heaving-to,  lee shores,  and much else.

A programme for the course is available from Oliver Shaw on request,  and it will also be emailed to all participants.

In the light of the Covid situation we are not currently planning anything else for 2021,  but we are starting to look ahead to 2022.

We are periodically asked about the possibility of running a Cruising Week on inland waters.   Partly by way of responding to that,  and partly because it would fit in well with my extended family and with the availability back on loan of my erstwhile boat A Capella,  we are considering the Norfolk Broads for 2022.   Feedback thus far,  mainly from those who participated in this year’s event on the Fal estuary,  has been very positive.   However a possible serious difficulty there is the low bridges,  and we need to investigate further whether we feel that these can be managed.

We are currently in the throes of arranging a 3-day event on Ullswater,  which some claim to be the most scenic of all the Lakes,  based at Ullswater Yacht Club,  June 4-6.   There is likely to be camping available on site.   Further details to follow.

One of our members approached us during 2019 about running a camping and cruising weekend on Llyn Tegid (a.k.a. Bala Lake).    We did hope to be able to offer this for that year,  but he later advised that his club had a very full programme already for that year but that there could be a possibility for 2020.   So we undertook to explore this possibility if there were enough interest expressed by members;   but,  sadly,  despite 12 months publicity on the website and also in Mainsail there was nil response!   So we did not therefore pursue this further for 2020,  and then we were overtaken by Covid.   But we remain open to the possibility for 2022 if enough members express interest.

We also had an offer from a  member who lives in North Brittany, between Paimpol and Perros Guirec,  and offered to put on a cruising event there if there were enough interest.

He wrote “It’s a marvellous cruising location with many picturesque coastal islands, along with significant tidal variations and currents that need to be taken into account.

“My club organises an extremely relaxed multi-class regatta in a sheltered lagoon at the beginning of August, along with a few cruises with accompanying security.  …   …   I could easily try to organise a 3-day weekend of events including the regatta and throw it open to the GP14 association. After all, there will already be one GP14 taking part!”

Again we asked for expressions of interest,  and undertook to explore this possibility if there were enough interest expressed,  but here also despite 12 months publicity there was again nil response!   So we likewise did not pursue this further for 2020,  but we remain open to the possibility for 2022 if enough members express interest.

For a flavour of cruising and vintage events,  see the two reports below (at bottom) describing past events.

If you would like to raise any questions in the meantime,  or if your club can offer a cruising event for either this year or 2021,  please feel free to drop an email to Oliver Shaw or Steve Parry via [email protected].

We are very proud of our historic heritage,  including our vintage boats,  some of them seriously early and still sailing.

Amongst those,  boat no. 2,  Pimpernel,  the earliest surviving sail number in the world,  is now owned by the Association and has recently undergone a major restoration.   We are now looking for a permanent home for her,  which will preferably allow her to be exhibited,  and will also enable her to still be sailed on occasion.

Vintage Boat races:
Two early films from the 1960 of vintage GP14s racing on the river Ouse in York

Top tips for a good weekend