What was it like to compete in the 2019 Allen UK GP14 Nationals?

Szymon Matyjaszczuk gives his thoughts day by day in his excellent report below!

“After seven weeks of sunny sailing in Southern Europe we had to come back at some point. Me and Jack Lewis (my helm) decided to try our luck at the GP14 UK Nationals in Wales. We expected cold and windy sailing which Abersoch delivered.

Day one
It was around 10-14 knots of breeze with a gate start which was a new experience for us.
We had a good start at the beginning of the gate where we rounded the windward mark 3rd. As we sail onto the top reach we lost out to a couple boats as we didn’t know how the fleet reacted on the reach. As it turned out that the fleet goes high on the reaches so that they don’t get rolled.Then we had a good down wind moving back to the top ten where we gained two more boats on the upwind where we ended up finishing 8th. 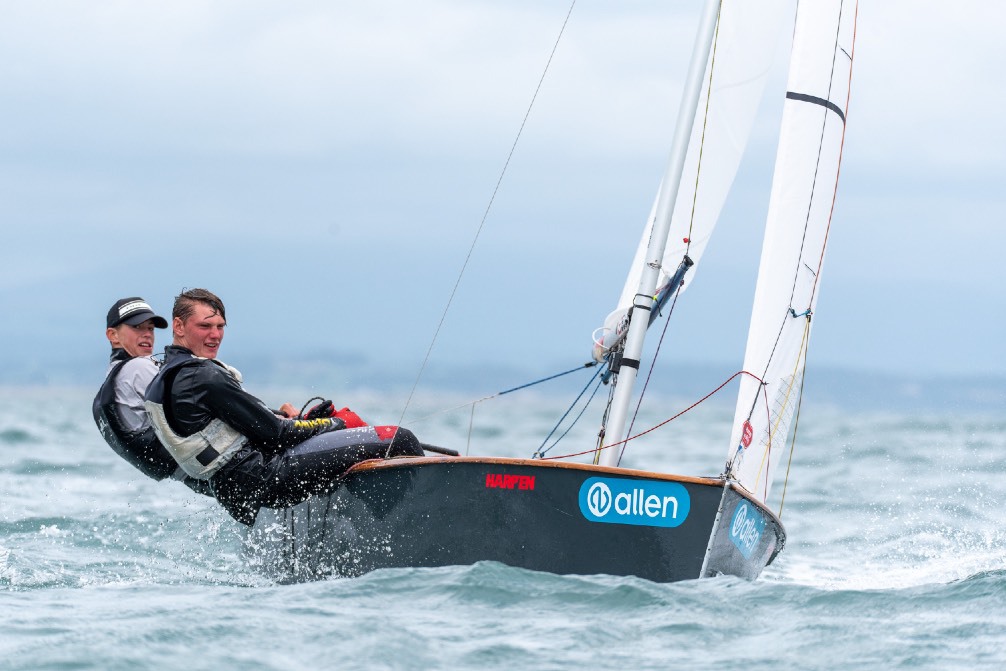 Day two
The breeze was significantly stronger on day two at around 15-18 knots which meant the beat length was increased dramatically which my legs weren’t pleased about. We then finished that race in 7th which we were pleased about!
Then we had a bit of a shaky start rounding the mark in the top 20,but we kept pushing for places all the way round the course till we where in a top 10 position on the last top reach where we had an overlap and had to gybe high which led us to a messy capsize where we then scored a DNC. 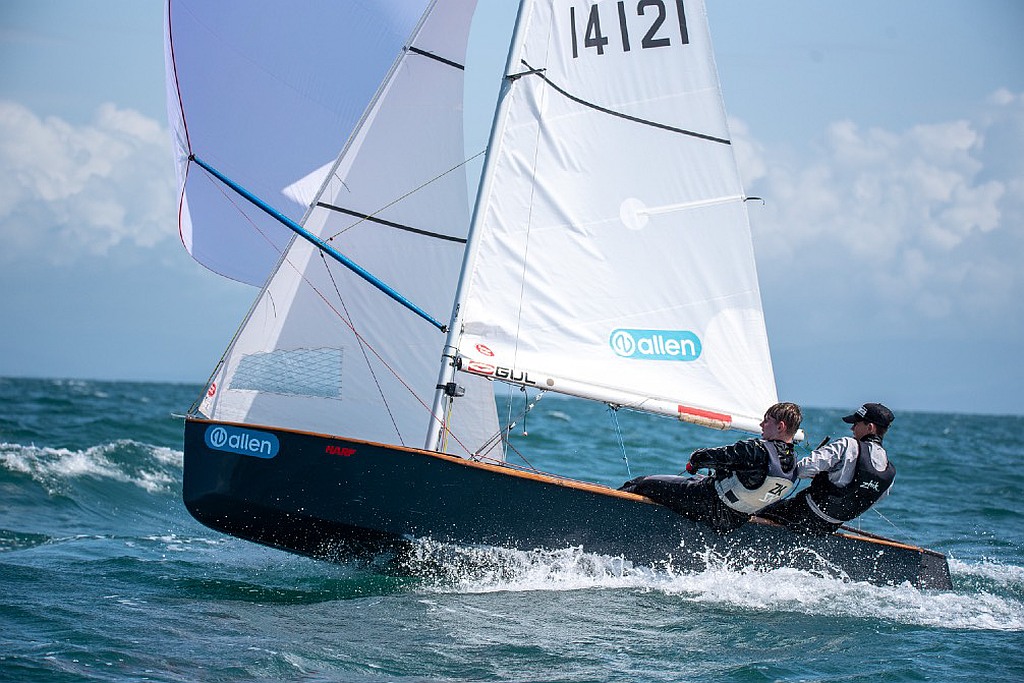 Day three
It was too windy for any racing as it was gusting 35 knots on the race course. As the day was canned we decided to pick up our 420 friends surf boards to go surfing with Sam Watson and some of the Irish Friends at Hells Mouth which was a superb way to spend our lay day. 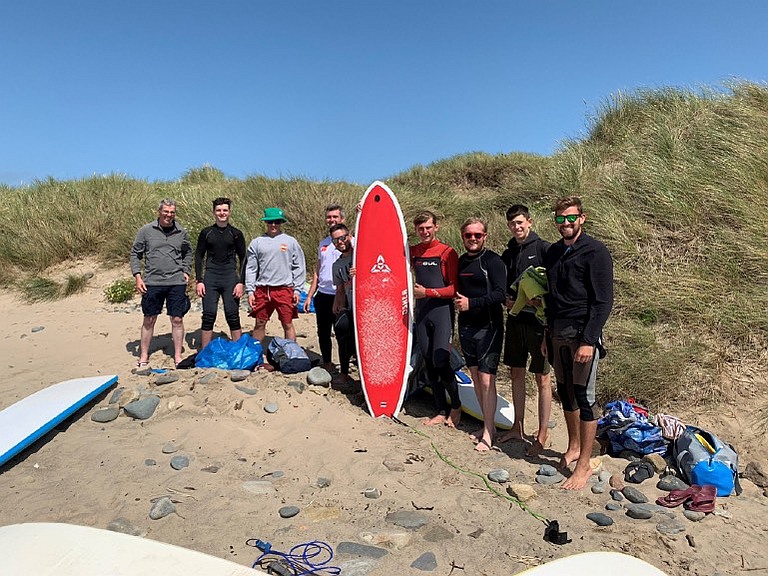 Day four
The conditions where still breezy wind still at 20 knots and it was going too be a long day on the water with 3 races. First race was tough where we finished in 24th. Then we had a line start which we preferred as it gave us more options. We executed a good pin end start then. Rounding the windward mark in the top 10 and keeping that position round the course. We lost a bit on the upwinds as we didn’t have as much weight as rest of the teams but gained them back on the downwind legs as we worked the waves hard and our light combinations benefited us down wind meaning we finished 7th.
Then we had another not so good race which we struggled in finishing 21 but where happy with our full last day of racing. 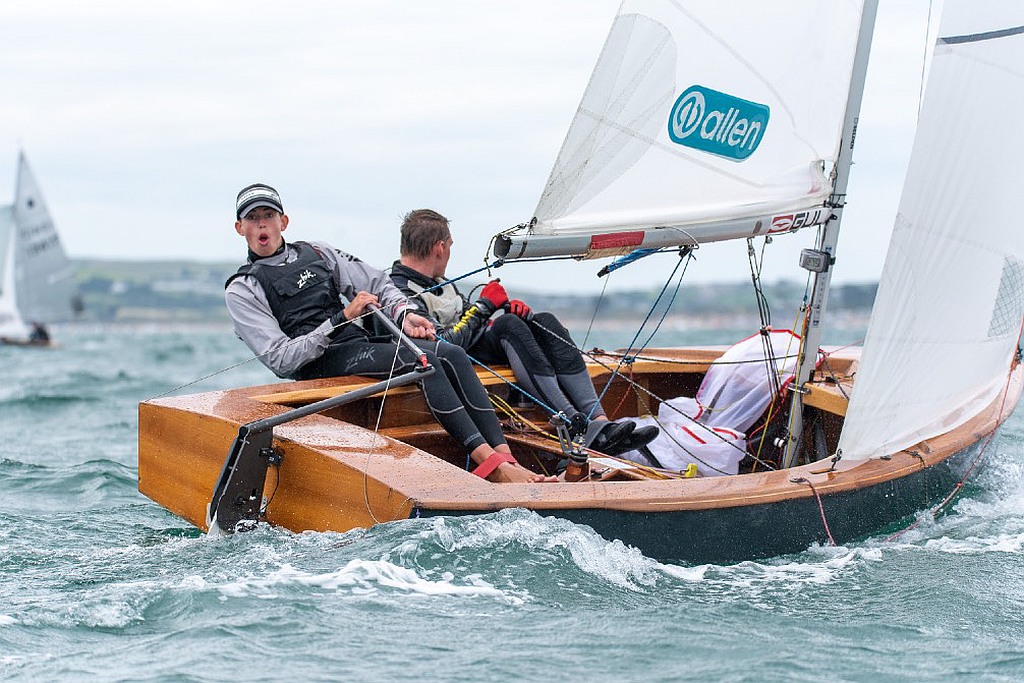 Day five
It was really light meaning the RO had put up a two hour postponement where unfortunately the wind had filled in half an hour later. After the postponement had ended we had a line start again which we where happy about as we knew that was one of our strengths where we won the pin and port tacked the fleet working our way out to the left
but only managed to make it in the top 10 and the windward mark with Sam Watson just behind us who had port tacked the fleet as well.  Then we had gained a further 2 places on the bottom reach as we stayed on the inside and high using the tide to drift us down.
Unfortunately we went left where there appeared to be more breeze but we had not taken the tide into account and had lost a lot of places on the upwind to the boats that sailed towards the cliffs on the right. Then the wind had completely died and the racing was cancelled promptly where we got a tow in by the safety crews. 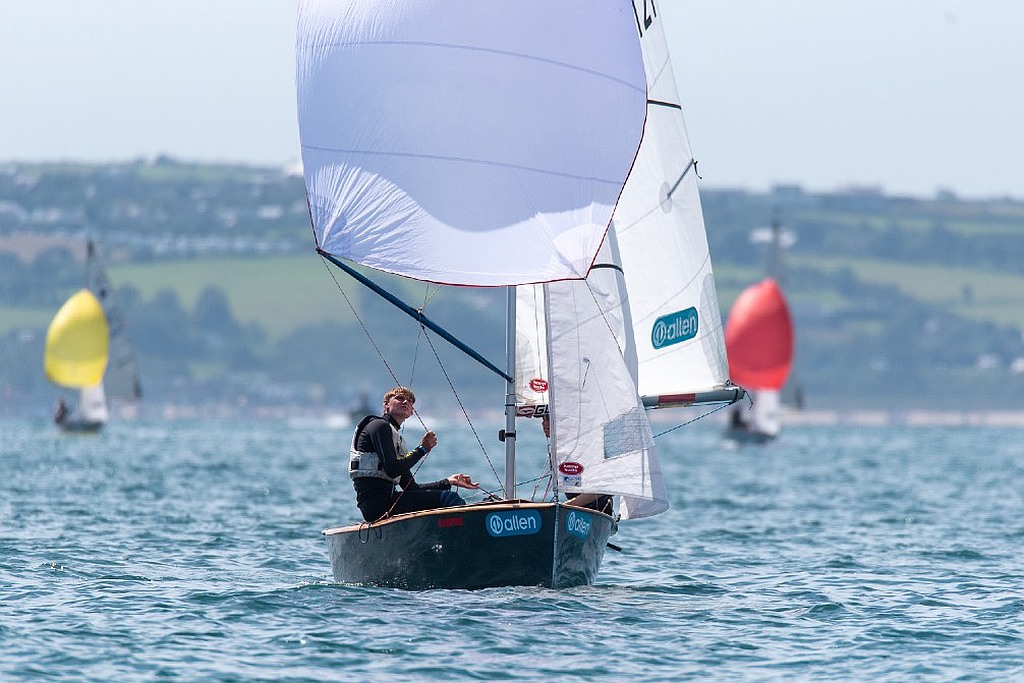 Day six
The wind was reaching 35 knots again meaning the racing was canned for the last potential day of racing. We packed up my dads boat and awaited prize giving later that evening. 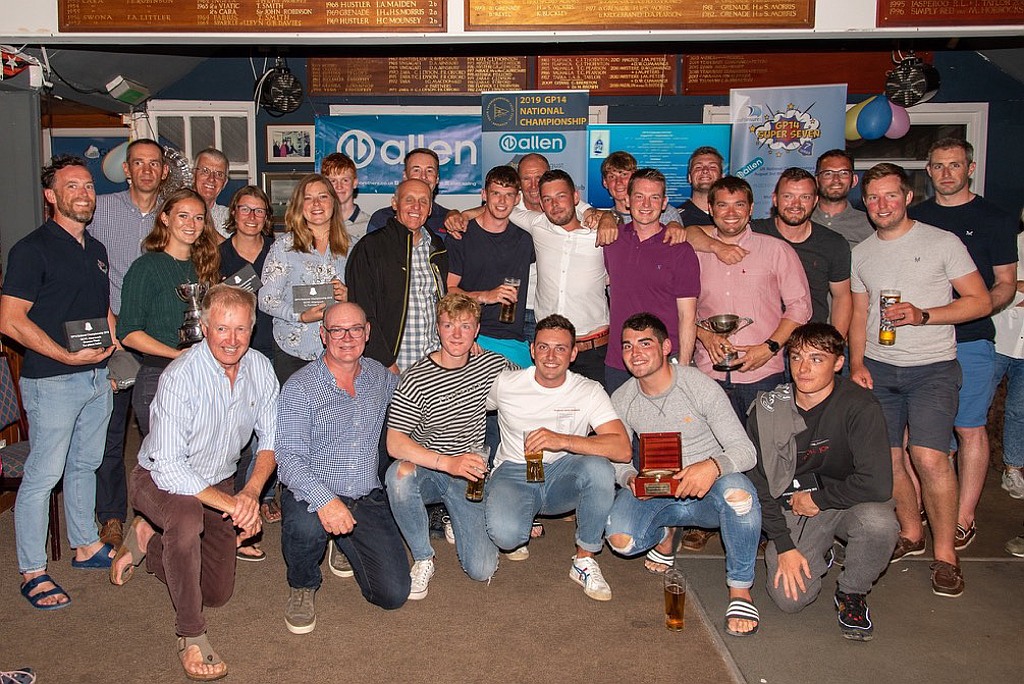 At the end of the championship we ended up in 2nd silver and 14th overall losing to my good friend from Ireland Peter Boyle who ended the competition in 7th place. 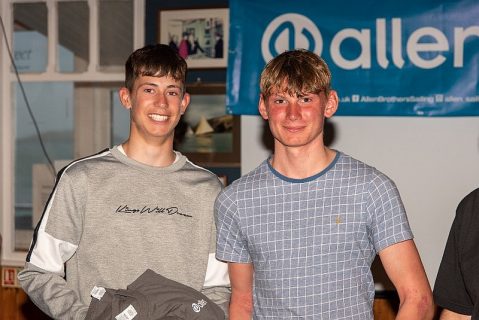 Jack and I had enjoyed the racing so much which wouldn’t be complete without the hard work done from Venessa Devereux and the RO and his Crew and getting an amazing quality of races completed in such difficult conditions.

Also a big thank you to Allen for supporting Us and the championships as it’s always good to have the best performance dinghy kit behind our backs.

It was an amazing experience and will definitely do the worlds in Skerries Ireland next year where we will probably be a few pounds bigger for the boat as we both get older.

What was hard about the championships?
The hardest thing about the championships was the amount of hiking we had to do as we normally sail the 420 and don’t have to use our legs to keep the boat flat. Also another thing that was difficult to manage was the wind shadow as the GP creates such a big wind shadow that planing into the inside of somebody is just not an option. On down wind legs in breeze we didn’t have enough weight to keep the bow from nose diving.

What were the most valuable lessons you have learned from the championships?
One thing that was really good was practising our close racing tactics which we mainly use in lighter airs in the 420.
Also we had learned that as a sailor you should check for stats yourself. As we failed to do so on the light wind race where we knew there was a lot of tide but failed to put that into the focus on our race strategy as we didn’t check the tide and apparently after asking a friend who had said after racing he had measured 6 boat lengths on the pin which had led him to round the mark significantly ahead. 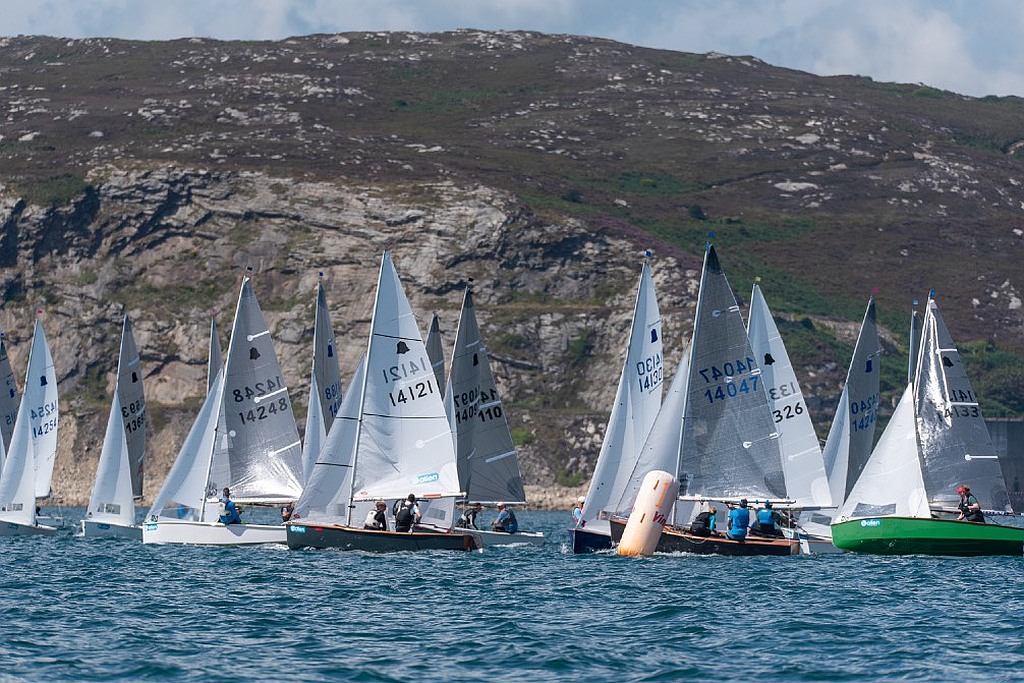 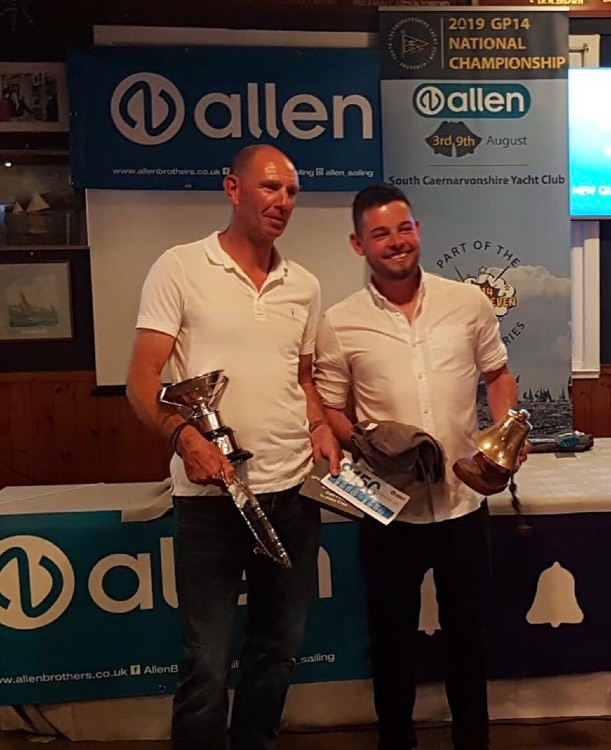 Well done to Sam Watson and Andy Thompson on the well deserved win.

Now onto the next event in Hayling Island for the 420’s Nationals ,470’s Nationals at Weymouth and GP14’s End of Season at my Home Club- https://www.gp14.org/events/2019-end-of-season-championship/ ”