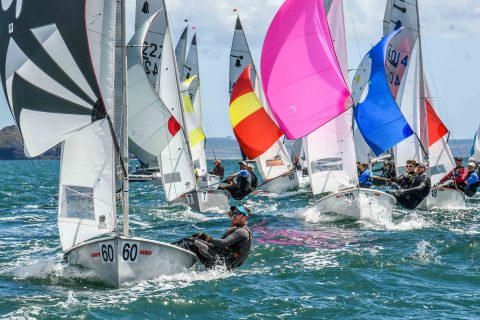 Day 3 of the 2018 Gul GP14 World Championship was the second day of racing, and it looked like champagne conditions, sunny, flatter water and a nice F3 wind.
The day started with 50 keen sailors attending a WHY (What Happened Yesterday!) race clinic with Mike Senior and Chris White (South Staffs SC) before we began queuing up to get onto the beach.

With the fleet only released onto the beach at launching time you have to be speedy with your rigging and there were a few that missed the start to the first race.

Steve and Jack Bennett (Shustoke SC) were the pathfinders for Race 4. Keen to be first out of the gate myself and Dodge (South Staffs SC/Chase SC) lined up half a dozen boat lengths from the rounding bouy for the pathfinder. As the premature pathfinder powered up and past us we went through the gate, and then heard the gun. We sailed the race anyway and it became 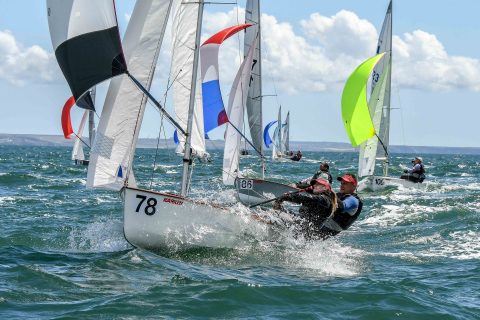 apparent that the right was the side that payed.

With the sea in much more of a normal state and less shifts more boats seemed to have found their groove and the mark roundings became a little more aggressive as you could tell by all of the lumps missing out of boats at the end of the day. The downwind legs took us toward the pretty spectacular backdrop of the Mount.

The first reach was quite fun, not exactly screaming down it but you could get on the plane.

Mike Senior and Chris White (South Staffs SC), perhaps spurred on to try and become the leading Senior in the household after Jim Hunt and Liz Senior had a better start to the event won the race convincingly. Pete Gray and Rich Pepperdine (Staunton Harold SC) were second and Matt Burge and Simon Potts (Poole YC) stayed consistent with a third.

Looking at the results after it seemed that quite a few who didn’t make the start or who were disqualified for hitting the guard boat.

Neil Marsden and Derek Hill (Blackpool & Fleetwood SC) were pathfinder for the second race of the day. For this one we decided to play the game of ‘when will they shut the gate’ and lost out along with a dozen other boats who then had to reach back to go round the gate boat. Unfortunately for us as we came alongside a wave washed us onto the boat so we enjoyed our second DSQ of the day. Until now we had just been doing triangle/sausage races but this one was triangle/sausage/triangle. 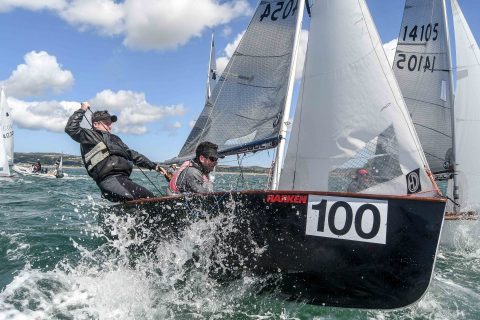 The current World Champ Shane MacCarthy and Andy Davis (Greystones SC) won the race with Jim and Liz second and the Bajan team of Jason Tindale and Sebastian Lammens-Keeping third.

At this point Richard Ham deserves a mention. Having resolutely refused all attempts, ever, to move him up from the Silver Fleet he was in danger of making the Platinum Fleet with a sixth and two twelfths with crew Hugh Gill. I am convinced that it was the not wanting to be promoted up the fleet that caused the pair to capsize on the start line, just in case they ended up having another good race!

With the Platinum Fleet carrying some unusually big scores the event is still wide open with Ian and Andy leading overnight, Matt and Simon second and Ross and Ed third. Ciaron and Tim Jones leading the Silver Fleet with George and Neil Meredith (Dovey YC) leading the Bronze. 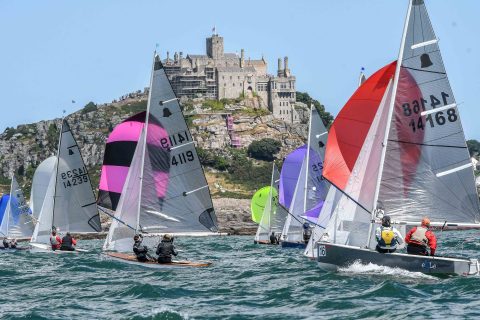 Thanks to our sponsors for the day which were Skerries SC, North Sails who provided race and spot prizes, Dinghy Tec and Harken provided us with a drone.