When you have a championship where the first 5 boats are separated by a mere 3 points you know it’s been a competitive one! That was the case at the GP14 End of Season champs held at South Staffs Sailing Club in the heart of Staffordshire over the weekend of 13th/14th October.

Sadly South Staffs is based in what was the windy half of the country on Saturday, so race 1 was abandoned after half the 28 boat fleet was flattened just after the start. The competitors retired to the club house to well deserved drinks & preparation for the black tie meal, prize giving & casino night.

Sunday dawned to light winds and huge amounts of rain, and the thought of 3 races back to back with no discard after losing race 1. There were also sore heads/slurred speech issues which were cured instantly by the deluge of water!
Race 2 started in the said light breeze/rain and was to be duplicated in races 3 & 4 in that it was snakes and ladders racing where consistency counted. The winners of race 2 were Lawrence Creaser/Andy Hunter closely followed by Mark McKeever/Kevin Hopkins & Andy Smith with Phil Hodgins. Race 3 started in the still light wind/rain and after an initial spurt by Ian Willis & Keith Dutton was won by Ross Kearney/Ollie Goodhead followed by Andy Smith/Phil Hodgkins and Dave Young/Laura Burch just passing the Willis/Dutton boat on the line.

With 3 races to count it meant there was still a chance of someone coming out of the pack to win, but after initial great showings from Hugh Devereux/Malcolm Bird, Derek Fleming/Seonaid Young and Maciej Matyjaszczuk/Andy Ferringdon the race was won in convincing style by the Creaser/Hunter team, followed by Young/Burch and a fast improving Kearney/Goodhead.

Once ashore it was apparent that a combination of Creaser & Hunters 8th in race 3 and Kearney/Goodhead’s great last beat in race 4 gave the title to Ross Kearney & Ollie Goodhead of South Staffs SC.

Prizes were awarded to:- 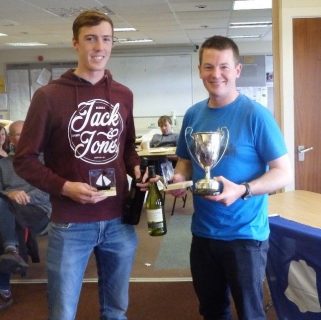 13th place – Justin Smith & Sam Watson – prize awarded for the best case of under achievement – unusual use of a fixed rudder in race 4.
There were 2 other nominations…….the inability to control an automatic car and weird practice of putting a wet suit on using aerosol deodorant. These will remain nameless but not forgotten!!!!

Huge thanks to the championship committee of the GP14 Association & South Staffs SC for organising a great event and we look forward to visiting Welsh Harp Sailing Club for the 2019 End of Season championships.