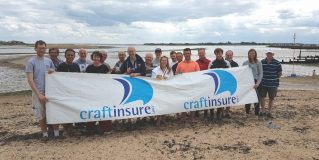 The only way was Essex on 03 and 04 June for the GP14s with 18 making the trip to the east coast for the Southern Area Championships. The weekend was shared with the Fireball and Merlin classes which created a real big event buzz and run very professionally run by Brightlingsea Sailing Club.

The first sea event of this year’s Craftinsure Super 8 Series, there were three boats travelling from the Midlands to get in some vital prep for the Looe Nationals while Welsh Harp Sailing Club fielded eight boats.

As we rigged on Saturday and prepared to launch I got my first experience of the famous Brightlingsea mud! As it quickly enveloped my lovely new hikers and filled my boots I tried to pretend it was an expensive spa treatment and had secret rejuvenating properties. We eventually cleared the sludge out of the boat on the trip out to the sailing area and it proved well worth the mess for the champagne sailing that followed.

Race Officer Phil Rust and his team had set a standard triangle/sausage course and set the fleets off on a rolling 5, 4, 1, 0 sequence with the GP14s last to go. The line was good and we were away clean. The first beat presented an in-boat debate as the right-hand side had the tide but the left more wind. Left won out and P&B’s Fergus Barnham and Andy Hunter (Snettisham SC/Nantwich SC) took the lead round windward followed by Pete Gray and Rich Pepperdine (Staunton Harold SC). The conditions were perfect with steady winds of 10 mph and blazing sunshine. Andrew Clewer and Sarah Collingwood (Poole YC) won the battle for third from Frank Nickless and Michelle Evans (Chase SC/South Staffs SC).

With the wind swinging a bit on the start of Race 2 both the Fireballs and Merlins were over and to the back of the starting queue. For once the GP14s were the well-behaved fleet (no recalls all weekend must be a record!) and we got away clean although knowing that we now had the two faster fleets starting behind us.

Tide was less in effect for this race but you still had to pick a side which Andy Wadsworth and Andy Shrimpton (Welsh Harp SC) did the best finding themselves leading round the windward mark ahead of Fergus and Andy with the irrepressible Richard Ham (Tollesbury) third and Frank and myself fourth. The Andy’s held off Fergus and the other Andy for two legs with the Inland Champs finally passing on the gybe mark and us passing on the next leg. Fergus and Andy were once again looking unstoppable but we were doing our best to nibble away closing slightly on the second beat.

The Fireballs passed through without problem but by the time we got to the run on the sausage leg the Merlins were whizzing through nicking our wind which caused a few issues for the GP14s and a heated exchange on the mark between Frank and one of their boats took us back from the leaders and allowed Andrew and Sarah to close in but not pass and we kept those places until the end with Pete and Rich finishing fourth.

With just two races on the Saturday we enjoyed a beer in the sunshine and then a large group of us headed to a pub chosen by unofficial social secretary Maciej Matyjaszczuk. Apparently, there was food but we wanted for so long for it (2.5 hours!) that it was all a bit blurry by then.

The next day was just as sunny and the earlier start meant we could launch from shore and avoid the muddy bog. The sailing area was the same as the day before but the wind a stronger 12-15mph initially.

Fergus and Andy and Pete and Rich were having another good battle but the Staunton sailors couldn’t match the downwind speed of P&B boys. The stronger winds favoured local sailor John Ball (Brightlingsea SC) who had his first of a trio of fourths in this race and Youth Week graduates Ed Coyne and Szymon Matyjaszczuk (Welsh Harp SC) had their best finish in fifth.

By the final race, Fergus and Andy had the overall win sown up and all Pete and Rich needed to do to hold second was finish fourth or higher. The battle for positions three to five was closer but it was Andrew and Sarah that had the best final push leading from the front to take the win and secure third overall. John finished fourth but it wasn’t enough to move him up finishing fifth overall with myself and Frank fourth. Ed and Syzmon were sixth and highest placed boat from Welsh Harp. A wonderful time was had by all and with several newcomers to the Class enjoying their first taste of the Super 8, and the sea in the case of Andy Ferrington, it whetted the appetite for the Welsh Areas on 01 and 02 July.

Thanks to Brightlingsea Sailing Club for their superb event management and our Series sponsors Craftinsure. More information about the Super 8 Series can be found here: www.gp14.org/super8