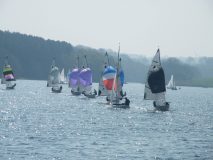 heart of the Midlands.  When the duty team arrived at 9.00 am the reservoir had a mirror like calm, but gradually the wind and the visitors arrived, including the current world, and UK national champion Shane McCarthy from Ireland, heading a quality field.  After a briefing from Race officer Graham Newton, 17 boats took to the water in a respectable SSW breeze and got away cleanly up the first beat.  Local boys Pete Gray and Rich Pepperdine took an early lead but were overhauled by Richard Instone and Steve Parker who took the bullet, with Fergus Barnham and Andy Hunter completing the top three.
After an excellent lunch, battle resumed with the wind slightly shifted and a different course – with a new race winner in the shape of Frank 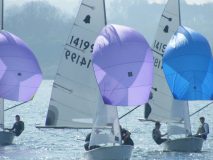 Nickless crewed by Michelle Evans with Pete Jacques/Hayley Ramadhar in second and Instone and Parker in their new SPBoat third – Gray and Pepperdine had slipped to seventh.  In race 3, yet another winner in  the shape of Fergus Barnham crewed by Andy Hunter took the honours with Nickless/Evans in second and sailmaker Neal Gibson crewed by Megan Hicklin third. Gray and Pepperdine were now back up to fourth. The variable and shifty winds certainly seemed to have favoured the Midlands pond sailors and particularly those with lighter crews, but nobody had a consistently good set of results to sleep on, most of the top five having at least one result they would be hoping to discard on the Sunday, however the overnight lead was with Silver fleet sailors Nickless/Evans.  After racing, a substantial evening meal of curry followed by ice cream, was enjoyed by many, followed by some serious beer tasting.
Sunday dawned promising to be even hotter, but with more wind forecast for the afternoon and so it proved. Races 4 and 5 were held back to 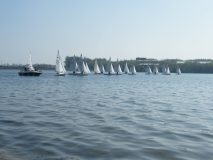 back before lunch and with slightly more wind Gray and Pepperdine didn’t put a foot wrong taking 2 bullets, Barnham/Hunter picked up a 2nd and 4th, and Sam Watson/Jack Hopkins two thirds. It looked as though the race for the event was between Gray/Pepperdine and Barnham/Hunter with at least 4 boats in with a chance of making the third spot. During lunch, a club race took place and the wind really started to kick in with a number of sailors taking a dip.  Thirteen boats then contested the final race of the event which after the first general recall of the weekend, took place in gusty conditions and explored some more corners of the reservoir and gave the teams some fantastic planing reaches. There were also a few capsizes resulting in two retirements.  Gray and Pepperdine secured a third bullet to convincingly win the event followed by Barnham/Hunter and Instone/Parker, which coincidently was the finishing order of the last race.
The Silver fleet was won by Nickless/Evans (5th overall) and the Bronze fleet by Nicky and John Robinson (11th overall).  At the prizegiving the winners thanked everybody who had made the weekend a great success and wished everyone a safe journey home.
Results can be found here.
Back to the Super 8 series page.