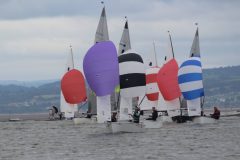 With a long range forecast for very light winds not changing leading up to the championship, it looked worrying if
there would be any sailing over the weekend, but the race committee didn’t give up hope and was not going to pull the plug on the tide until the last moment.

This year’s GP14 Northern Championships, part of the Craftinsure Super 6 Series, was set as a 10 race sprint series over the two day. On the Saturday morning, as the competitors arrived and set up their boats, there was hardly a breath of wind and glorious sunshine.  19 boats where assembled to challenge for the title, including Andy Hunter the 2015 winning 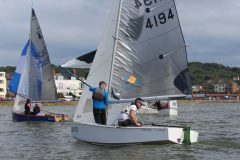 crew now paired up with Sam Watson looking for their championship title, David Lawson the 2014 champion, now having a turn at crewing for our Association President Duncan Greenhaigh and the current Scottish Champions Andy Smith and Phil Hodgkins.

There was an inevitable postponement to the first race, and as time and tide wait for no man, the decision was made to run all the races on the lake, once the sea breeze filled in.

A windward leeward course was set, with a short reaching spreader mark at the windward mark, with the aim to get a couple of laps in the “sprint”, all marks being taken to starboard so a real likelihood of a few port/starboard traps. The first start line showed how the game was going to be played for the rest of the event, with boats hovering on the line jostling for wind and position, looking to push the windward boats over early while protecting the space to leeward, so 8 out of 10 races had an x flag or general recall or both.

The first race was in very light wind, with the pack stayed close on the beat with the top boats smoother tacking getting to the port rounding mark before the masses poured in on both tacks.  Sam and Andy defended their lead around the top on the run back to the finish line, closely followed by Andy and Phil, both keeping out in clean air, while the rest of the pack closed together on the dead run home.

With a single lap taking almost 25 minutes, the course was brought in closer for Race 2, the fleet spread slightly on 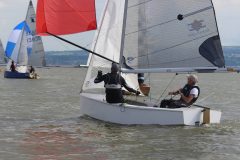 the beats, but closed again on the dead runs, Andy and Phil rounding first, with Frank Nickless and Steve Parker a few boat lengths behind. Justin Smith and Michelle Evans held off Sam and Andy to the finish but unfortunately had been OCS.

Race 3 saw a couple of big OCS casualties with both Andy and Phil and Frank and Steve not returning to clear the line, which gave the race win to Fergus Barnham and Ellie Devereux, and Mal Jones unfortunately lost a port and starboard protest from Sam to pick up a 30% penalty.

The two afternoon races saw a further increase in the wind, bringing with it closer challenges and raised voices on the windward mark and a bit of rafting and vehement denials of water on the leeward, resulting in a few misses and second attempts.  There was a nice lift in the centre of the course and a bit more pressure in the left side running down, read by Fergus and Duncan to get first and second, Frank pushing Sam out to fourth with Andy and Phil picking up another OCS.

The last race of the day, with a clean start and without too many incidents with the pin end being favoured by the leading boats.  Sam and Andy took the windward mark first and maintained this at the leeward, but Andy and Phil managed take a higher line up the second beat, followed by Fergus and Ellie, both managing to get through Sam before the run home.

The evening was filled with music, crazy dancing and a good quantity of liquid lubrication continuing into the small hours, which resulted in a morning after the night before look in many of the competitors faces the next day. 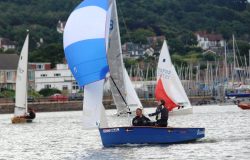 The weather had changed from sun and light airs to overcast drizzle with a good bit more wind pressure to play with.
Justin and Michelle, fresh faced from many jugs of rum cocktail showed their metal by taking the first race of the day, with the rest of the fleet spread across the lake in a closely fought finish.

The next two races saw the wind pick up and shift westerly flattening the beats and bringing more of the fleet looking for a port layline into the windward mark, and difficult spinnaker hoists on a short congested beam reach.  Places were swapped regularly through the fleet, with Andy and Phil taking first in race 7 but only a 5th in 8. 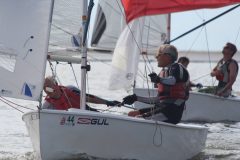 The last two races of the day saw the prowess of the Association President come through leading from the start in race 9 ahead of Andy, and chasing him close to the finish line in the final race, with Sam taking the third spot in both races.

The final results meant that Andy and Phil picking up another Championship win and with a 4th in the Inlands this must place them well in the Super 6 Series.  Sam and Andy were only 2 points behind, with no counting scores outside of the top three, and Fergus and Ellie only one point behind 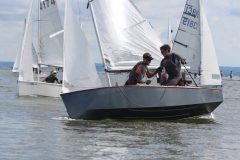 Thanks to West Kirby Sailing Club for hosting the event and to all the volunteers from the club that helped out throughout the sailing and the activities on shore.

What a fantastic, and quirky, weekend. The mid-week forecast looked pretty dire and it was understandable that the Masters/Youths the weekend before and a 1mph forecast would put a few off. 19 boats made it in the end though for what was a very unusual race format.

It looked like Saturday would be a write off on arrival with blistering sunshine and zero wind and the boat park naysayers all predicting the worst. So much so that I settled down with a cider and lunch before the RO rushed out with a white board and briefed us for 5 races on the marine lake in a triangular course and we were off!

The first race at 25 minutes was a little short but he found a more suitable length after that. OCSs were the talk of day one with an initial plan for 1 discard and day 2 to be fought out in separate fleet races. This would have seen eventual winners Andy Smith and Phil Hodgkins battling it out in the Bronze Fleet thanks to two disqualifications. Thankfully common sense prevailed and we were given 2 discards and the plan for Day 2 was to repeat the format of Day 1. The RO upset a few (me included) by awarding a finish in race only to count it as an OCS in the results.

The food, rum and terrific Moses Band helped to soften that blow though. Event Organiser Jean-Louis was attempting to be sensible at 11pm and go home after the band and cardboard box game had blow off a bit of steam and readjusted people’s hip joints. It wasn’t to be though as the thirsty visitors tempted the unsuspecting Belgian with a re-creation of the Bajan Rum Punch happy hour. 6 to 7 (or maybe more, I lost count) jugs of punch later we were evicted.

The next day, on arrival in the boat park at 10.15am (15 min before the scheduled start of racing) things were eerily quiet. The rum punch crew were a little worse for wear with Ann Penny still in her PJs, Steve Parker still asleep and Jean-Louis a whiter shade of pale.

Racing got under way nearly on time. The horrendous hangovers proved beneficial for myself and Justin Smith. It turns out he sails much better when a little worse for wear as we managed a race win in the first race of the day. Despite a discussion about the course, and our non-understanding of where the leward mark was temporarily losing us the lead. Jean-Louis was gesticulating on the water after race 1 that he was less than happy being lead astray with the drinking and was not performing at his optimum!

Other members of the Rum Punch crew also faired well though with Ann Penny and Julie Courtney busting out a result that was tastier than their moves on the dance floor the night before, 6th place in race 8. Well done ladies.

After 10 (yes 10!) races in total Andy Smith and Phil Hodgkins were the worthy winners, Sam Watson and Andy Hunter came second and Fergus Barnham and Ellie Devereux third. We welcomed fleet newbies Joe Butterworth and Toby Chapman (12th) with some no holds barred shouting on the water and drinking in the bar. All in all a good weekend, let the hangover continue at the Nationals!