The 2016 GP14 Leinster Championships were hosted by Sutton Dinghy Club and there was a super representation from clubs up and down the country. The strength of the Class comes from the GP14 presence in the likes Moville, Donegal, Donaghadee, Newtownards, East Antrim, East Down, Enniskillen, RSt.GYC, Blessington, Lough Foyle, Sligo, Greystones, Skerries, Clontarf, Mullingar, Swords and the crews being prepared to travel to events like the Leinsters. This year we also saw boats from the emerging fleets of Youghal in Cork and Cullaun in Co. Clare.

It was fitting that the class should be sharing this event with the Mirror Nationals as many of the current GP14 sailors began their sailing careers in this class and indeed the current GP14 fleet boasts more than its fair share of past Mirror National Champions. A number of the GP14 sailors here at the weekend were in Sutton 30 years ago when the Club last hosted the Mirror Nationals in the week of Hurricane Charley. Indeed Des McMahon (Cullaun) and Libby Tierney (Blessington) vividly remembered a race with 105 starters and only 18 finishers such were the conditions that week. With 3 Olympians and a World Champion in the GP14 Leinster Fleet this weekend in Sutton, the Mirror sailors and their parents were seriously interested in the events progress. 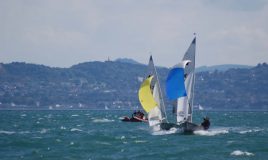 Light & shifty winds and three different race winners on Day 1 tells only the beginning of the story. The fickle conditions meant each race was full of twists & turns with corresponding tales of woe & good fortune. Race 1 began in moderate conditions but a dramatic right shift half way up the first beat saw boats that had worked the right hand side gain handsomely. Making the most of the windshift were the McGuinness brothers John & Donal who rounded first followed by Blessington sailors Simon Cully & Libby Tierney. John & Donal comfortably held on to win race 1 from Shane MacCarthy & Damian Bracken with local GP14 legend Hugh Gill sailing with Tim Coyne taking 3rd. Race 2 saw Keith Louden & Alan Thompson establish a commanding lead before letting victory slip from their grasp at the last moment by sailing to the wrong finish mark. This let local pair, Alan Blay & David Johnson sneak the win from Ger Owens & Phil Lawton. Shane & Damian were 3rd with Keith & Alan realising their error and scrambling back to 4th. In race 3 Keith & Alan’s luck improved. Ger & Phil were race leaders but as the final beat turned into a fetch initially and then a reach, the leading group of boats became becalmed leaving the rest of the fleet to hoist their spinnakers and sail past. Profiting the most from the fickle breeze, Keith & Alan took the win from Shane & Damian with Ger & Phil doing well in the end to salvage 3rd place. The fleet sailed ashore to more scones & cake and bar-b-que with a superb Thai Supper later in the evening. Sutton hospitality is a force to be reckoned with! Overnight leaders in the gold fleet were Shane & Damian despite not winning a single race. Sutton pair Katie Dwyer & Michelle Rowley led the silver fleet while Blessington sailors Matthew & Richard Street had sailed very consistently in the tricky conditions to lead the bronze fleet. 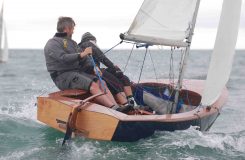 The tidal nature of Sutton Creek meant a 13.30 start on Sunday gave the fleet a welcome lie-in. The first race of the day saw Shane & Damian as early race leaders but as the wind died on the last beat, they were overhauled by both local pair Alan & David and Ger & Phil. Alan & David held on for their second win of the weekend with Ger & Phil notching up another 2nd. Race 5 was to provide another sting in the tail. The wind swung 90 degrees on the second lap, letting boats once again hoist spinnakers on the upwind leg and with numerous casualties and benefitters. Keith & Alan crossed the line ahead of Shane & Damian with Katie & Michelle in third. However Keith & Alan were left cursing their misfortune once again as they crossed the line to silence – an OCS putting paid to their chances of overall event victory. This meant race 5 winners were Shane & Damian with Katie & Michelle hanging on superbly to 2nd from Ger & Phil in 3rd.

The wind died and the prospect of a final 6th race was looking remote when the AP was hoisted a number of times. However, one more twist in the weekend’s weather saw the wind fill in and white horses suddenly appear. OOD Scorie Walls promptly got Race 6 underway as the wind started to gust above 20 knots. Shane & Damian established a good lead over the first lap only to capsize at the second windward mark. They were soon joined by Keith & Alan leaving Sutton Dinghy Clubs Alan & Dave to sail on to a third race win and secure 2nd overall. Shane & Damian recovered to 2nd which was sufficient to give them overall victory while the McGuinness brothers took 3rd position & 3rd place overall.

So to summarise, an event full of twist & turns, conditions to severely test, an OOD team that coped admirably with the GP14 and Mirror fleets and superb racing for competitors from all over the country.

Thanks to Sutton Dinghy Club for their exceptional hospitality and for organising an event to remember. 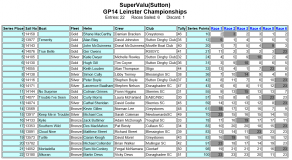